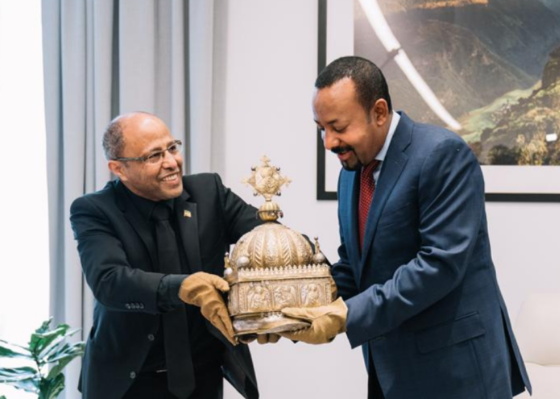 A rare 18th century copper crown, which had been kept in a Rotterdam apartment for 20 years, has been returned to Ethiopia, with the help of the Dutch government.

The crown had been kept by Ethiopian refugee Sirak Asfaw since, he says, he found it bag left by an Ethiopian visitor to his flat in 1998. Thinking it had been stolen, he refused to give it back to the regime at the time, because, he says, he feared officials had been involved in the theft.

After the regime changed, Asfaw told the BBC he felt the time was right to to return the crown and consulted Dutch art theft expert Arthur Brand and the police for help in returning it home.

The crown has now been handed over to prime minister Abiy Ahmed by Asfaw and trade minister Sigrid Kaag, who is on a one day visit to Ethiopia and transported the crown in the government plane.

Delighted to see the return of a precious ancient crown to Ethiopia, after it has been lost for 25 years. The Netherlands promotes the protection of cultural heritage under the UNESCO treaties. #UNESCO #Culturalheritage @NLinEthiopia pic.twitter.com/8FgYS0RcK2

‘The Ethiopian people are owner of crown,’ Asfaw, who has been in the Netherlands for 40 years, told broadcaster NOS. ‘I would give a Rembrandt back to the Netherlands.’

‘It is extremely important that cultural heritage is returned to the place where it orginated, particularly when it is unclear how it has ended up somewhere else,’ Kaag said. ‘That does not happen enough.’

The crown is one of around 20 known to have survived and was made between 1780 and 1790. It will now be displayed in the National Museum in Addis Ababa.