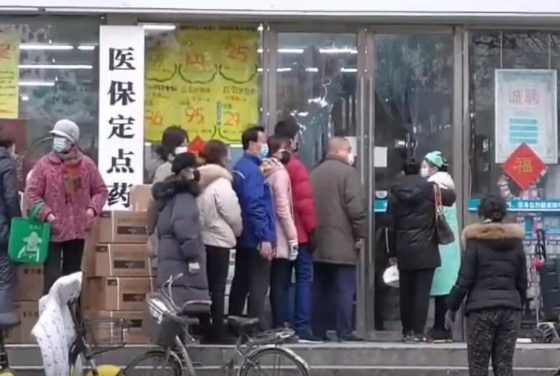 Fifteen Dutch nationals and their partners who were flown home from the Chinese city of Wuhan have left quarantine after being declared free of coronavirus.

The group of 17 spent two weeks in isolation to prevent the spread of the virus, which has been renamed Covid-19. They were allowed to return home under strict conditions, though some opted to stay at a military facility at Huis ter Heide.

Kathleen Bell, a British woman who took Dutch citizenship and has lived in China for 10 years, told Nieuwsuur tight restrictions also applied to the group that stayed on the military base. ‘We had to keep two metres away from other people. If we wanted to go to the washroom we had to put a mask on.’

She said she was puzzled that the evacuees had not been tested for the virus. ‘We know evacuees – French, British and Belgians – who said they had been given the tests. We didn’t have them. We don’t have the virus, but it’s as if one country does it one way and another does it another way.’

She added that she planned to return to Wuhan, where she has lived for the last two years, when the emergency had passed. ‘We definitely want to go back, our entire life is there. It’s a very friendly city.’

The public health agency RIVM has said the tests are unreliable and 14 days’ quarantine is enough to establish if a person has the virus.

Infectious disease specialist Jaap van Dissel said: ‘We know from the figures in China that the incubation period – the period between exposure to the virus and the emergence of symptoms – is five or six days on average. Outlying cases range between two and 11 days. That’s why we opted for a safe quarantine period of two weeks.’

Meanwhile, 31 Dutch people are still on board the Westerdam cruise liner, which is berthed in Cambodia with 233 passengers and 747 crew still on board. An 83-year-old American woman who was on the cruise has tested positive for the virus, though her condition is described as stable.

Most passengers had disembarked before the woman was diagnosed with the disease, including an unknown number of Dutch tourists. The RIVM has asked anyone who has been on the Westerdam to report to their local GGD health centre.

Others have left the ship and are spending their quarantine in hotels in Phnom Penh. KLM has said it will do everything it can to repatriate passengers once they have received a clean bill of health.

The Red Cross has launched a Giro 7244 appeal to fund better public information about the virus. The organisation says it needs €30 million to help countries where the public health system is already overstretched, in regions such as the Middle East and Africa.

‘This is exactly the moment when we need to make sure the virus doesn’t spread further,’ said international co-ordinator Frido Henrickx. ‘Simple measures like hand washing can make a big difference.’