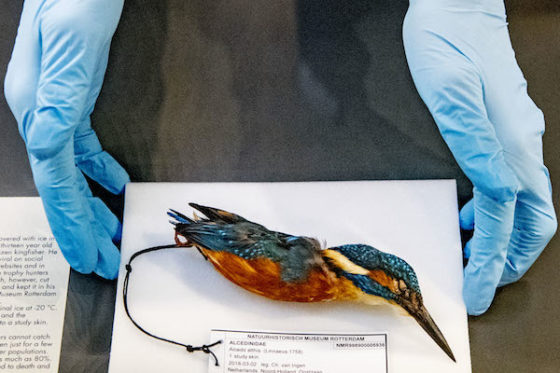 A kingfisher which had been frozen in ice and exhibited – ice and all – at the natural history museum in Rotterdam has been melted down and is now back on show.

The bird, which is called an ‘IJsvogel’ or ice bird in Dutch, became trapped in a frozen pond where it was photographed by a 13 year-old boy in 2018. The ice block in which it was sitting then became part of the museum’s collection of animals which have come to an unusual end.

Curator Bram Langeveld said considerable time and effort went into polishing the ice and keeping it at the right temperature but that it was deteriorating.

‘It’s a shame but we did see it coming, curator Bram Langeveld said. ‘The ice was becoming opaque and the bird was no longer visible.’

‘Defrosting the bird was quite exciting because we didn’t know state it was in. We thought we might end up with a little bare chicken leg of a thing and a handful of blue feathers but it went very well.’

The kingfisher, which has been sealed in an airtight plastic bag, has now been reunited with the other animals in the exhibition ‘Animals with a story’, which includes a hedgehog which got caught in a McFlurry lid, a necrophiliac duck and a sparrow that destroyed an attempt to break a domino record.

The return of the kingfisher has meant that the last of the crab lice in the collection  had to make way for for lack of space. ‘We thought long and hard about it but it had to be done,’ Langeveld said.