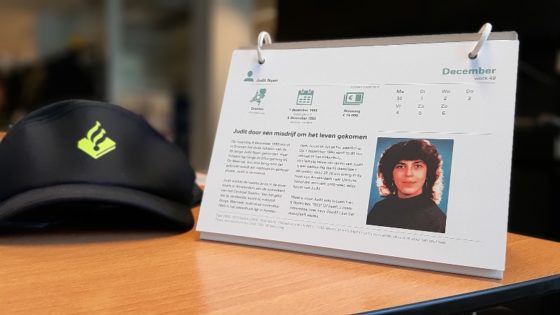 A new Dutch police calendar listing 52 unsolved crimes will now be distributed in psychiatric prison institutes, according to the NOS broadcaster.

The calendar of ‘cold cases’ – created for the fourth year – is being sent to the tbs clinics for the first time in an attempt to solve cases from a dead baby found in the rubbish in Utrecht in 2006 to the death of HIV-positive sex worker Judit Nyari, whose body was found in woods in Dronten in 1993.

Police told the NOS that it was important to relatives that these cases were remembered, and that the investigations continued even if the mysteries were decades old. ‘Of course they hope that we can solve the cases but the most important thing to them is that we don’t forget,’ said Aart Garssen, leader of the cold case team, to NOS Radio1.

‘Some 800 people are walking around the Netherlands knowing more about these cases, and we appeal to them to come forward with information so that these people’s relatives no longer have to live in doubt.’

Last year there were 202 tips on the basis of cases in the calendar and two were reopened. One of the most striking this year is the dead baby girl named ‘Renée’ van Utrecht by Utrecht council. Her body was discovered in a rubbish sorting factory by a worker on 30th October 2006, in waste that came from a wide area of the Netherlands.

DNA and isotope testing led nowhere and the calendar is the last hope, according to Rob Boon, of the local cold case team. ‘Somewhere a mother is crying about the fate of this child, and we are very concerned about it,’ he said to RTV Utrecht.