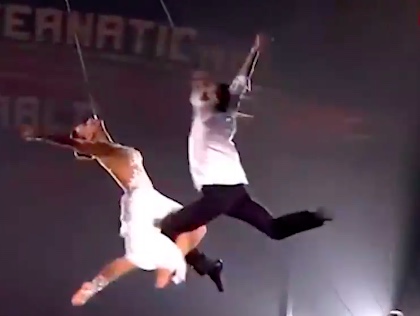 A still from a promotional video for the Sky Angels.

A circus show in Amsterdam was halted after an acrobat fell 10 metres to the ground when her partner broke a tooth while she was suspended from a mouth harness.

The woman needed surgery to her neck after her partner landed on her in the accident in Amsterdam’s Carré theatre on Friday. The show by Russian married couple Sky Angels was abandoned and the audience sent outside while paramedics attended to the two casualties.

Circus producer Henk van der Meijden told the Telegraaf that the male acrobat was missing a tooth when he arrived in hospital. ‘They think that was the cause. The tooth broke away and that meant he lost his grip on the bit in his mouth that she was hanging from.’

Van der Meijden said the man was hauled down by his wife’s fall, having tried unsuccessfully to grab a safety cord above his head. He suffered concussion but no serious injuries. The act was performed without a safety net.

Witnesses said that they thought at first it was part of the act. ‘But it quickly became clear this wasn’t planned,’ one spectator told RTL Nieuws. ‘They were both unconscious, but breathing.

‘She fell first. He fell on top of her. They landed on the edge of the circus stage. People sitting ringside rolled him off her. By then he was conscious again.’

Circus trainer and safety expert Nikolay Pyasta said the duo’s act pushed the boundaries of safety, but the performers were aware of the risks. ‘I saw the show on December 19 and as a professional, I thought it was a dangerous act.

‘You don’t see this level with Dutch acrobats, shows here concentrate more on the artistic aspect. It’s more a thing for Chinese or Russian circus artists who focus more on the dangerous side of their act, as is common in traditional circuses.

If you want to be the best in the world, you have to take risks. In training the performers work with mats or a net, but during a show they’re often left out because the entire set has to be covered. Most artists hold a cord in their hand as an extra safety measure, but this duo didn’t have that.’