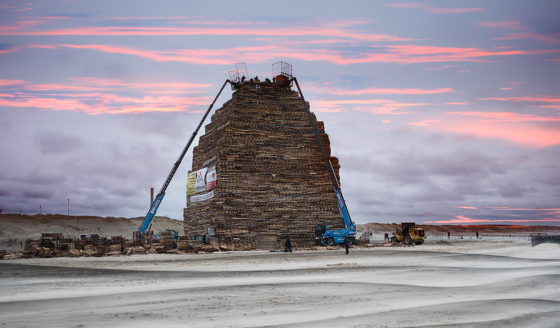 Building the Duindorp fire in 2018. Photo: Maurits Verbiest via Flickr

Thirteen people have been arrested after riot police tackled a second night of unrest in The Hague’s coastal suburb of Duindorp.

Some of those arrested on Sunday were children, including a nine-year-old boy who was caught with a Molotov cocktail, the city’s acting mayor Johan Remkes said.

Remkes urged police and other emergency services to work ‘closely together’ ‘to face down lawlessness in The Hague’. NOS said police believed a group of around 50 people, many of them teenagers, were orchestrating the violence.

A bus stop was also vandalised and several container bins and pallets set on fire during several hours of disturbances. On Saturday night a reporter and cameraman from local TV station Omroep West were threatened and pelted with eggs when they went to the neighbourhood to investigate rumours of potential unrest.

The trouble has been linked to the city council’s decision to ban the giant New Year bonfire towers that have been a feature of the annual festivities since the 1990s. Last year strong gusts of winds caused ‘fire tornados’ at Scheveningen when they carried flames from a 48 metre-high stack of burning pallets across the seafront.

The city’s previous mayor, Pauline Krikke, resigned in October when a safety board report revealed that she was aware that the bonfires breached safety rules, including a limit on the height of the stack, but decided not to intervene because she feared repercussions.

The organisers of the traditional vreugdevuur – literally ‘fire of joy’ – last week pulled out of talks with the council to organise smaller-scale bonfires this year. They said their plans did not meet the local authority’s stringent guidelines, such as a 10-metre limit on bonfires.

The council had been due to make a decision on whether to allow the event to go ahead on Tuesday.

In a Facebook post, the organisation blamed the council for failing to allow the bonfires to go ahead, describing the outcome as ‘a blow for the many hundreds, or maybe thousands, of people who warmly appreciate our vreugdevuur‘.

The large communal bonfires were introduced in the 1990s to regulate the informal tradition of lighting street bonfires from discarded Christmas trees, which led to fights between gangs.

The bonfire organisers wrote: ‘As an organisation we have focused for years on building a controlled vreugdevuur so that the problems in and around our neighbourhood disappeared.

‘Since we are not being allowed to organise a fire, we will not be used to organise other activities to keep the peace. The ball is now in the council’s court because we are washing our hands of the whole thing.’

Acting mayor Johan Remkes said he would not be forced to change his mind by the threat of violence.

‘The goverment must never be blackmailed in this way,’ he said. ‘That at least is the attitude of this mayor, and I hope the council will not allow itself to be swayed by this either.’