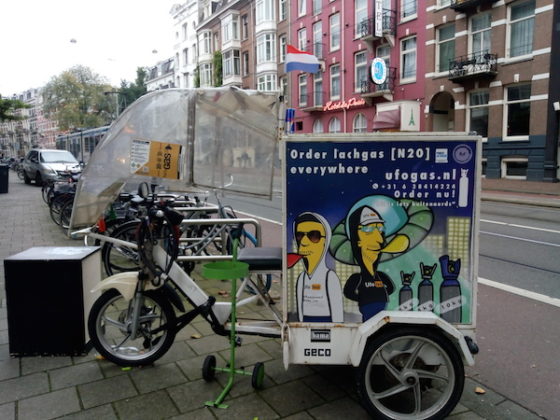 The Dutch government is planning to ban the sale of nitrous oxide, or laughing gas, for recreational use.

The decision follows several warnings about the impact of excessive use of the gas on health, which has been described in a new report by drugs assessment commission CAM as ‘average to large’.

‘We can no longer accept the risks to the health of young people,’ junior health minister Paul Blokhuis said. ‘CAM’s verdict is that using laughing gas recreationally can be very damaging. A balloon is not as innocent as it may seem.’

Blokhuis plans to have the gas included in the opium law B list alongside cannabis and qat. Users will not face criminal charges but possession, trade, production and import of B list drugs are illegal.

It is as yet unclear when a ban will come into effect and how it will be regulated but Blok has said he thinks the legislation will be ready in about nine months.

The legislation will also have to make an exception for selling the gas to use in whipped cream dispensers, he said. ‘You will still be able to buy apple pie with whipped cream’, the minister said in his statement.

In the meantime, local authorities should bring in bylaws to ban the sale of laughing gas on the streets and in shops, Blokhuis said. Several Dutch cities, including Arnhem and Amsterdam have already brought in bans or are considering doing so.

The NVIC has described the increase as ‘a worrying development’ and says far more cases are likely to have gone unreported. Long-term use and high quantities is also being reported, with patients taking up to 50 balloons of gas within a couple of days, a spokesman said.