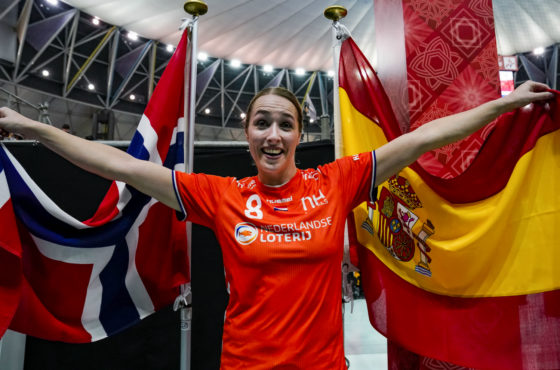 The Dutch women’s handball team are world champions after beating Spain 30-29 in a dramatic final in Japan.

A sluggish start saw the Netherlands fall 7-3 behind early on, but by half-time they had built a 16-13 lead and stayed narrowly in front in a nip-and-tuck second half.

The Spaniards fought back to tie the scores at 29-29 with less than a minute left, but six seconds from the end the Dutch won a penalty which Lois Abbingh converted to claim victory.

‘This final was so typical of our whole tournament, with ups and downs,’ said Abbingh. ‘You could see that everyone was exhausted, but it didn’t matter. You get what you deserve. Unbelievable.’

Estavana Polman was named player of the tournament and surpassed the silver medal won by her husband, footballer Rafael van der Vaart, at the 2010 World Cup. ‘We’ve fought so hard for this title and always believed in each other. And now we have the gold medal. I need to let it sink in.’

The tournament started inauspiciously for the Dutch, who lost three matches in the group stages, prompting criticism of their French coach, Emmanuel Mayonnade. But director of the handball association Sjors Röttger singled him out for praise after the final.

‘He is 36 years old and making his world championship debut. It was maybe a flawed baptism of fire, but he was flexible afterwards and supportive at the right moment. He did an outstanding job,’ said Röttger.