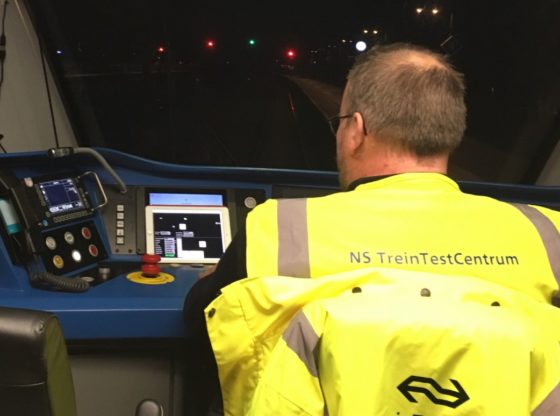 The test in progress. Photo: NS.nl

The train has an extra computer which tells it to start, reduce speed and stop according to a programmed schedule.

The test drive, between the stations Kampen Zuid and Swifterbant was a success with no delays, the NS said. There were no passengers on board and a driver was on hand in case of mishaps.

‘The computer communicates with the track and detects upcoming switches and signals and  knows where other trains are,’ NS spokesman Erik Kroeze told broadcaster NOS.

Trains already use computers but starting, braking and stopping is done by drivers, not all of whom are happy about the development which, they say, may threaten jobs in future.

‘But we are hearing positive comments as well (..) It’s interesting for the profession to see how technology is progressing,’ Kroeze said.

Self-driving trains are meant to tackle the increasing volume of passengers and NS is not the only operator to experiment with a wholly computerised system. ProRail did so a year ago on the Betuwe freight-onlyroute while regional operator Arriva employed a self-driving train between Groningen and Buitenpost in March.

NS is testing the behaviour of the autonomous trains on a slippery track and reactions to other train traffic but does not expect them to become part of the schedule for years.