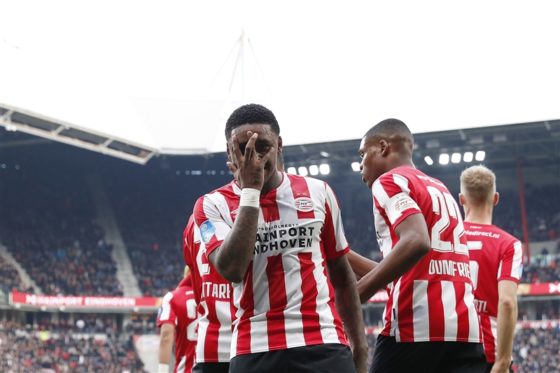 Ajax and AZ Alkmaar kept up the pace at the top of the Eredivisie with three-goal victories over Heracles Almelo and Utrecht respectively.

Quincy Promes scored twice for Ajax to join PSV Eindhoven’s Donyell Malen at the top of the scoring charts with 10 goals in 14 matches. Promes headed his team into the lead after 26 minutes and tapped in Hakim Ziyech’s beautifully weighted cross for the third after an hour.

AZ underlined the gap between the top three and the rest by brushing aside fourth-placed Utrecht in the Galgenwaard. Teun Koopmeiners’s free-kick was diverted into the net for the opening goal after 24 minutes, before strikes from Oussami Idrissi and Myron Boadu confirmed the Alkmaarders’ dominance.

PSV notched up their first win in five games as Steven Bergwijn and Donyell Malen returned from injury. Bergwijn’s impact was immediate as he fired in a 25-metre thunderbolt after 16 minutes, then curled in a shot off the post 10 minutes before half-time.

A relieved Mark van Bommel described his team’s first-half performance as ‘spectacular’.  ‘We created a lot of chances, Heerenveen had one or two as well,’ he said. ‘In the second half the 2-1 came out of nowhere and then it was difficult for a while, Heerenveen got more loose balls, so we’re glad to get the win.’

At the bottom of the table, VVV Venlo ended a run of seven straight league defeats with a 2-1 home win over Twente Enschede. Peter van Ooijen rounded off a sweeping move for VVV’s opener after 34 minutes before Elia Soriano nodded in a second two minutes later. Haris Vukcic pulled one back before half-time but VVV held out in the second half.

VVV’s win took them above ADO Den Haag and took them further ahead of bottom-placed RKC Waalwijk, with both relegation strugglers staging dramatic comebacks to salvage home draws.

ADO twice fell two goals behind against WIllem II, but in the last 10 minutes Tomas Necid’s header and a piledriver by John Goossens earned them a 3-3 draw. RKC left it even later against Emmen as Sylla Sow scrambled in a long throw in the sixth minute of injury time to cancel out Michael de Leeuw’s 15th-minute opener.

Vitesse Arnhem slumped to their fourth straight loss despite the arrival of Japanese World Cup veteran Keisuke Honda. Vitesse captain Bryan Linssen didn’t mince his words after the 2-0 defeat at Sparta. ‘If you lose four times to opponents you should be beating, it’s obviously a crisis,’ he said.

Feyenoord dropped their first points since Dick Advocaat took over as manager with a 1-1 draw at Groningen. The manager incensed that Groningen’s Mike te Wierik was only booked for hauling down Luis Sinisterra when he was clear on goal. ‘That should have been red. I don’t even think it was a difficult decision.’ said Advocaat.

PEC Zwolle’s first win in four games allowed them to overtake their opponents, Fortuna Sittard, in a game that saw plenty of fireworks on and off the field. Play was suspended in the opening minutes after fans let off flares, after which Mustafa Sayman fired PEC into an early lead. Both sides saw red before Iliass Bel Hassani doubled the lead, while late goals for both sides rounded off an incident-packed game.