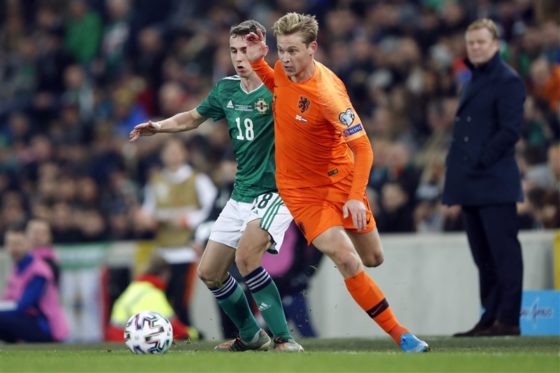 The Netherlands sealed qualification for Euro 2020, their first summer tournament in six years, with a workmanlike 0-0 draw against Northern Ireland in Belfast.

The Dutch progress from Group C together with Germany, who eased past Belarus 4-0 in the night’s other game, while Northern Ireland can still qualify through the play-offs in the spring.

Captain Virgil van Dijk said he was satisfied with the result. ‘We’re going to the finals, that’s the most important thing,’ he told NOS. ‘We wanted to win tonight and had chances to score, but we knew it would be difficult and in the end we got the job done.’

Barcelona midfielder Frenkie de Jong struck a more frustrated tone. ‘We’re very happy we made it, but I feel like we should be winning here,’ he said. ‘We were never really in trouble and I think we didn’t didn’t do enough on the ball.

‘We had chances to score, could have attacked more, but we’re going to the Euros and that’s the main thing in the end.’

In the absence of the injured Memphis Depay and Donyell Malen, and with Georginio Wijnaldum starting on the bench, Ronald Koeman surprisingly opted for Feyenoord’s Steven Berghuis up front rather than Luuk de Jong or AZ’s in-form striker Myron Boadu.

Oranje had marginally the better of a turgid first half and should have gone ahead when Berghuis skewed Quincy Promes’s pull-back onto the crossbar.

The hosts then missed a golden chance to take the lead when Joel Veltman was harshly penalised for handball in the area, only for captain Steven Davis to blast the ball over the top.

The Dutch had a strong claim for a penalty just after the hour mark when Luuk de Jong, on for Berghuis, appeared to be hauled down as he reached for a header, but referee Szymon Marciniak blew for offside instead.

As chances became few and far between, Donny van de Beek had the ball plucked off his toes by Davis before Frenkie de Jong fired the loose ball high over the crossbar.

Northern Ireland pressed forwards in the last 10 minutes in search of the win they needed, but their best chance, a speculative chip by substitute Michael Smith, was easily claimed by Jasper Cillessen.