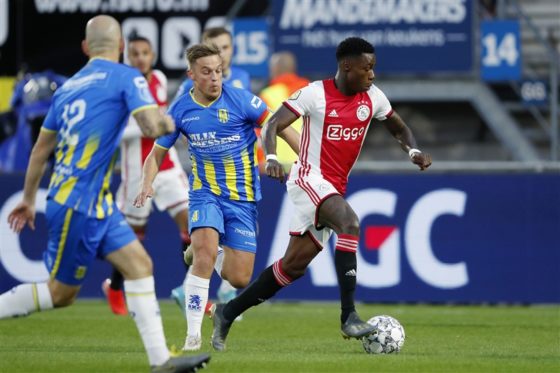 Ajax have opened up a three-point lead at the top of the Eredivisie after their closest rivals, PSV Eindhoven, suffered their first defeat of the season in Utrecht.

PSV’s misery was compounded by red cards for Nick Viergever and Jorrit Hendrix in the second half. Both sendings-off came on the advice of the VAR panel after referee Danny Makkelie initially issued yellow cards for heavy challenges.

Ajax had to rely on a moment of brilliance from Quincy Promes to come away from Waalwijk with a 2-1 win. The bottom-placed club held the league leaders until the 76th minute, when Promes thumped in a shot from the edge of the area off the underside of the crossbar. Dusan Tadic had put the visitors ahead shortly after half-time before Saïd Bakari equalised for RKC in the 63rd minute.

VItesse Arnhem drew level on points with PSV with an impressive 4-0 win in Venlo. A double by Bryan Linssen and a long-range strike from Riechedly Bazoer gave Vitesse a three-goal cushion at half-time, with Nouha Dicko completing the scoring early in the second half.

The Arnhem side climbed into third place at the expense of AZ Alkmaar, who went down 4-2 to Heerenveen at their temporary home in The Hague. The Frisian side went in 3-1 ahead at half-time, and though Calvin Stengs pulled a goal back for AZ soon after the break, their fate was sealed when their captain Teun Koopmeiners diverted Rodney Kongolo’s header into his own net.

Feyenoord remain ensconced in mid-table following a tame draw at home to Heracles. Jens Toornstra put Jaap Stam’s side ahead in the first half, only for Orestis Kiomourtzoglou to poke home an equaliser on 63 minutes.

Sparta spurned a chance to go fifth when they missed a penalty early in the second half at Groningen. The Rotterdammers paid the price when the home side scored twice in the last five minutes through Kaj Sierhuis and a Charlison Benschop penalty.

Twente Enschede’s promising start to the season is a fading memory, as the promoted club succumbed to their fourth straight defeat at home to Willem II. A sixth-minute header by Marius Vrousai proved enough for the Tilburgers to claim the points.

Emmen lifted themselves out of the relegation zone at the expense of Fortuna Sittard as they beat the Limburg side 2-1 at home. Bassala Sambou gave the visitors an early lead that lasted until half-time, but Michael de Leeuw’s 100th career goal and a fine strike by Sergio Peña earned Emmen their third league win of the season.