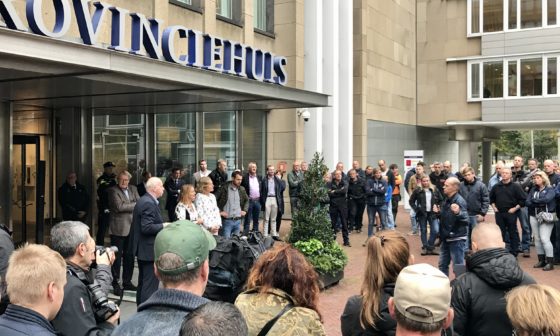 Four provinces have overturned their regulations to curb nitrogen-based pollution after hundreds of farmers picketed assembly houses on their tractors.

The co-ordinated protests at noon on Monday prompted the provincial governments of Drenthe, Overijssel and Gelderland to scrap tighter rules introduced following a Council of State ruling in May. Friesland decided on Friday to withdraw its regulations following a similar protest.

Convoys of tractors converged on eight provincial assemblies on Monday. The farmers called on regional governments not to introduce new rules until the state has decided how to implement the judgment, which said current regulations to reduce pollution by nitrous oxide and ammonia breached European law.

In Drenthe, Henk Jumelet, the provincial deputy responsible for agriculture, said the authority was going ‘back to the drawing board’ and would withdraw its current regulations, after initially saying they would be suspended. Around 1,000 farmers gathered outside the assembly house in Assen to hear the announcement.

There were similar scenes in Overijssel’s capital, Zwolle, where agriculture deputy Gert Harm ter Borschler emerged from a brief meeting with farmers’ representatives to address a crowd of several hundred from a wooden crate held aloft by a tractor.

Having initially refused to change the rules and offering a meeting in the next 24 hours, Harm ter Borschler changed course to loud applause from the assembled farmers.

Gelderland also announced it would draw up new regulations after the assembly returns from its autumn holiday next week.

In Groningen police had to hold back farmers who parked a tractor within a metre of the front door of the provincial assembly and threatened to break it down unless the deputies backed down. The building was pelted with eggs and police from Germany were drafted in to support their Dutch colleagues.

Zuid-Holland said it would continue to apply its existing rules and re-evaluate them in May next year, following a meeting with farmers.

‘Zuid-Holland is the most densely populated area of the Netherlands,’ said deputy Jeannette Baljeu. ‘It is a challenge for the administration every day to find a better balance between the activities of residents, businesses, farmers and nature.

‘As a province we are always working together to find a good balance. That’s why we are willing to hold talks. Not just with people in agriculture, but other parties that are affected by the nitrogen regulations.’