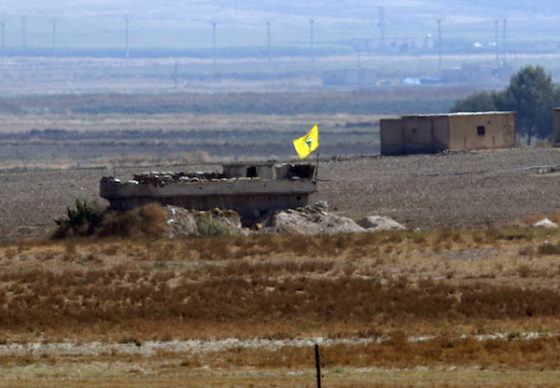 A flag of the Kurdish People’s Protection Units, or YPG, flies on a building. AP Photo/Lefteris Pitarakis via HH

A large majority of Dutch MPs back the introduction of European sanctions against Turkey following the military offensive on north-eastern Syria.

MPs, debating the attacks on Thursday, described the Turkish action as ‘unacceptable’, ‘ethnic cleansing’ and ‘illegal. In particular, the cabinet should call for punitive measures, possibly financial, within a European context, MPs said. They also want the cabinet to raise the issue with Nato as a matter of urgency.

Trade minister Sigrid Kaag said after the debate that  ministers share MPs’ concerns and that the offensive brought major risks. These include the risk of IS combatants escaping from Kurdish-run prison camps, the minister told reporters.

Earlier in the day, foreign minister Stef Blok said he had summoned the Turkish ambassador to the Netherlands.

‘Unilateral action does not help and no-one is served by the possible terrible humanitarian consequences,’ Blok said in a short statement. ‘The operation may lead to the creation of new refugee streams and damage the fight against ISIS as well as stability in the region.’

The Netherlands is talking to its Nato and EU allies and welcomes the decision by France and Britain to call on the UN Security Council, Blok said. ‘Our priority now is to get clarity about the consequences of the operation and to decide follow-up steps.’

Turkey troops began advancing into into north-eastern Syria on Wednesday, after launching a number of airstrikes at the US-backed Kurdish forces who control the region.

US president Donald Trump said on Sunday night US troops would withdraw from the region even though Kurdish forces have fought alongside the US against Isis in the region for nearly five years.