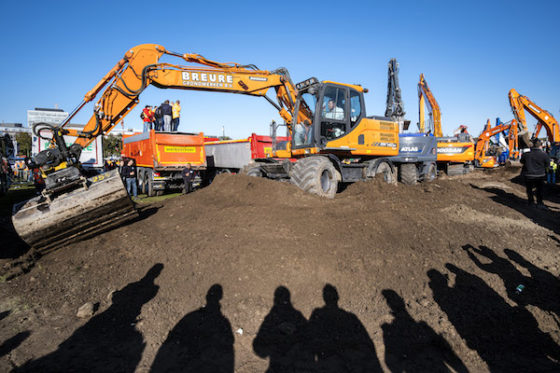 Builders protesting about government measures to combat nitrogen and PFAS pollution dumped tonnes of sand on the Malieveld in The Hague on Wednesday but the main demonstration passed off largely without problems.

The construction workers began leaving the area early on Wednesday afternoon after listening to speeches by industry leaders and ministers.

Earlier on Wedneday it emerged that some rules are being relaxed and that work on smaller projects can resume. Nevertheless, farm minister Carola Schouten faced whistles and jeers when she addressed the crowd and told them the country did not have to come to a standstill.

Junior environment minister Stientje van Veldhoven too told the crowd the government is doing all it can to break the deadlock. As the crowd chanted ‘now, now’, Van Veldhoven said: ‘Best of all now, I agree with that. No-one benefits from the delays.’

Hans de Boer, leader of employers organisation VNO-NCO said that the chairman of an industry body had never before gone on strike. ‘I am proud of you and what you have achieved,’ he told his audience ‘We have one of the best economies in Europe and one of the best countries to live in.

‘So what is going on: people in politics are no longer listening to the people who work. People in politics, do not forget that we earn the money, we create the jobs and we take care of the tax receipts. You have to listen to us.’

According to national statistics office CBS, the construction sector generates some 5% of Dutch GDP and creates 6% of jobs. It is also three times as important to the economy as farming.

Ministers have pledged to come up with a new package of measures by December 1 so building work can resume on some projects. And on Tuesday, it emerged that the tough rules for dumping soil and sludge polluted by PFAS, a toxic chemical, may also be relaxed.

The coalition parties in parliament have also said they will back a programme to allow building workers who have no work on because of the crisis to claim part-time unemployment benefits.

Last week angry farmers held a larger demonstration in The Hague, saying they are bearing the brunt of government efforts to cut pollution.