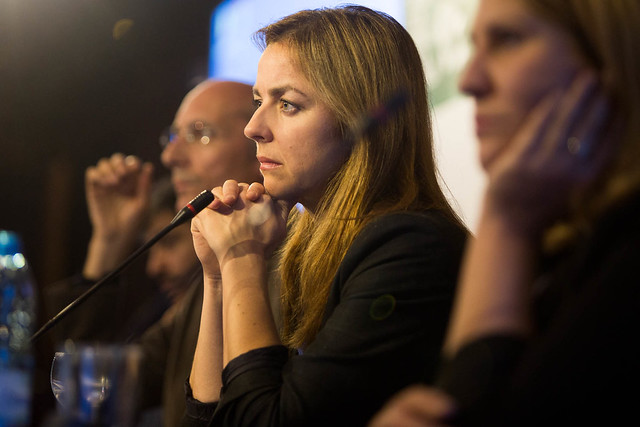 Thieme at an animal rights party meeting in Portugal in 2014. Photo: Partido Animalista via Flickr

Marianne Thieme, founder of the Dutch animal rights party PvdD, is stepping down as leader after 17 years.

Thieme’s announcement on Sunday came as a surprise to most of the political world, in keeping with a career that has constantly defied expectations.

‘Party leaders usually step down as MPs after losing an election,’ she told a gathering of Partij voor de Dieren members. ‘Looking at our growing movement, that would mean I wouldn’t be able to stop until I was 300 years old. But I’m not waiting until then: I’m doing it today.’

The 47-year-old said she had made up her mind following the European Parliament elections in May, where the PvdD retained the seat it won in 2014.

Thieme founded the party on October 28 2002 to promote animal rights in the context of a wider programme of activism on a range of issues spanning vegetarianism, women’s rights and the TTIP transatlantic trade treaty.

Despite being mocked at first, Thieme won a seat in Parliament in 2006, at the second attempt, and held it for the next 13 years, making her one of the longest serving MPs. The PvdD won five seats at the last general election in 2017 and holds 33 seats in local councils. However, it has never taken part in a coalition administration at any level, preferring to promote itself as a party of conscience.

As the first party for animal rights to win seats in a national election, the PvdD became a standard bearer for the movement across Europe, helping to set up a network of similar parties in countries such as Finland, Austria, Germany and the UK.

Thieme also gained a reputation for eye-catching stunts such as the outfits she wore to the ceremonial opening of parliament on Prinsjesdag, including a sailor’s hat with the logo Save Our Seas, a sash to mark 100 years of votes for women and a combat outfit with carrots for bullets. Her dress in 2019 highlighted the importance of insects to the ecosystem.

However, there has also been criticism from within her party from members who felt the PvdD should pay more attention to ‘human issues’. In July, MP Femke Merel van Kooten resigned from the parliamentary group in a row that centred on whether it should focus primarily on the environment rather than animal rights.

Thieme spent four months on sick leave at the end of 2018, but did not disclose the reason. ‘I want to show that medical records are thankfully still private,’ she told AD, touching on another campaign point.

Co-founder and senate group leader Niko Koffeman said: ‘She has spent 17 years in the spotlight in The Hague. There are other things to do in our social movement. It’s time for her to make way for other people.’

Thieme will formally step down as an MP next Tuesday, October 8. She is expected to elaborate on her reasons for resigning in an interview to be published in De Groene Amsterdammer, where her partner, Ewald Engele works, on Wednesday.