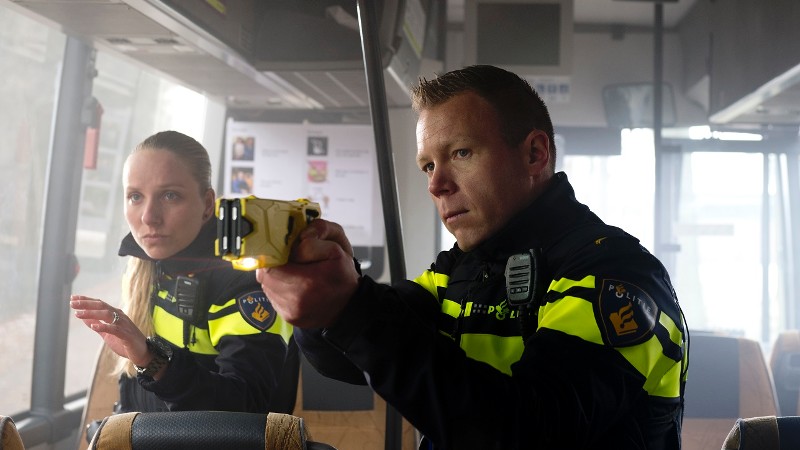 Justice minister Ferd Grapperhaus has told MPs that he backs arming the police with electronic stun weapons such as tasers, if the introduction is done with caution.


Speaking during a debate in parliament on Thursday, the minister said: ‘I am convinced it would be a good thing if the weapon is available, but we have to do it carefully.’

The taser, the minister told MPs, is a good option to fill the gap between the truncheon and the police dog. He is due to send his formal decision to parliament in November, when timing and numbers will also be finalised.

His comments come after Dutch police chief Erik Akerboom called on ministers to include electronic stun guns, or tasers, in the regular police kit immediately.

‘Introduce it,’ Akerboom is quoted as saying in the Telegraaf. ‘Things are taking too long. Politicians must act, especially since the recent spate of violent attacks on officers.’

Last November, police officials told the justice ministry that electric shock weapons such as tasers should become part of the equipment used by police officers on emergency service duty.

They said stun guns should be available to all police teams which are called out on emergencies. It will take five years before the introduction because 17,000 officers need to undergo special training to use the weapons, police said at the time.

In June 2018, a report on a year long trial by the police academy found that tasers do have ‘added value’ for the police and that the threat of use was enough to calm the situation down in six out of 10 cases.

Tasers work by firing electric charges of around 50,000 volts at a suspect from a distance, temporarily disabling them. Police say the danger of serious or permanent injury is minimal, but experts disagree on the risk to the heart.