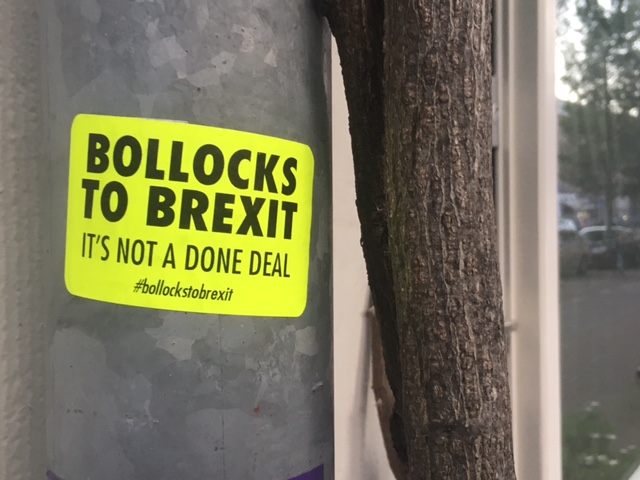 An anti-Brexit sticker on a drainpipe in Amsterdam. Photo: DutchNews.nl

British companies have upped their investments in the Netherlands more than five-fold since the Brexit referendum in 2018, according to new calculations by Dutch statistics agency CBS.

In 2016, British multinationals invested €14bn in Dutch companies but by last year this had risen to €80bn. This makes Britain the biggest foreign investor in the Netherlands, the CBS said.

By contrast, Dutch firms are pulling their investments out of Britain. In 2016, Dutch firms pumped €50bn into the UK but that halved in 2017 and in 2018 they actually withdrew €11bn.

This is because Britain’s withdrawal from the EU makes it less attractive for Dutch firms to invest in British subsidiaries.

The CBS figures are notable given that the Dutch foreign investment agency NFIA, which is working to attract new companies to the Netherlands, only managed to attract 38 new firms last year, none of which are big names and most of which involve small offices. So far, 98 firms have made the move.

A spokesman for the Dutch central bank, which provided the figures to the CBS, told the Financieele Dagblad the bulk of the investment – €30bn – was made in the final quarter. It was primarily due to intangibles brought to the Netherlands by one multinational, which it did not name.

Meanwhile, trade minister Sigrid Kaag has expressed her exasperation at the lack of movement in the Brexit talks.

‘At a certain moment, enough is enough,’ she told the Financieele Dagblad in an interview. ‘At that point the certainty offered by a worsening situation is better than continuing uncertainty with no new perspective.’

The latest developments in London are ‘unbelievable’, she said, and the damage that is being caused ‘dramatic’.