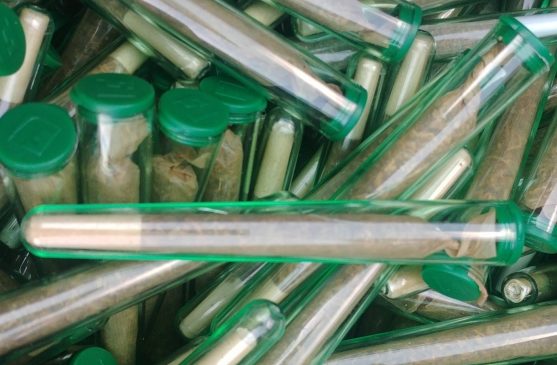 Hungarian police say they found a further 17 kilos of drugs in the car used by two Dutch men to attend a music festival in Budapest.

The two were arrested last week at the start of the Sziget festival, and remain in custody on suspicion of drug smuggling after thousands of pills and 450 joints were found in their tent.

Police have now found the pair’s car – a Volkswagen Caddy – which contained some 4,000 more ecstasy pills and 15 kilos of pre-rolled marijuna joints.

One of the young men is said to be Roelf B, a sprinter who represented the Netherlands at the European under-23 championshops last month in Sweden. One of the bags used to carry the drugs shown on a Hungarian police video includes the logo of TeamNL.

Hungarian police say the drugs brought to Hungary by the duo, both thought to come from Stadskanaal in Groningen, had a street value of €300,000.

The video also shows price lists found by the police, which include €15 for an ecstasy pill or a pre-rolled marijuana joint. The duo were offering a discount of €40 if people bought 10 or more and were using a Dutch phone number to contact clients.

The two men could face life imprisonment for drugs smuggling.