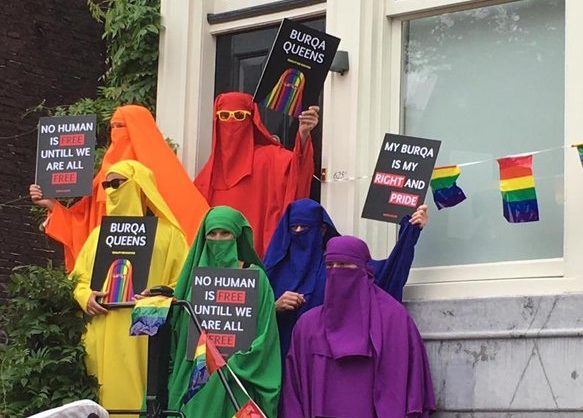 A Labour party councillor in Amsterdam has come under fire for dressing up in a yellow niqab at Saturday’s Pride celebrations.

The party published a photograph of Hendrik Jan Biemond and several other people in rainbow coloured niqabs, carrying placards describing the group as ‘burqa queens’.

‘The Amsterdam Labour party believes that freedom means you can be who you are and wear what you want,’ the party said on Twitter.

The photo was in response to the new Dutch ban on face covering garments such as niqabs and burqas in government buildings and on public transport.

However, the city’s Labour leader Marjolein Moorman distanced herself from Biemond on Twitter. ‘To me the burqa symbolises inequality between men and women,’ she said. ‘A man can show himself, a woman has to cover herself up. This is nothing to do with freedom.’

The original Labour party tweet generated thousands of comments on Twitter, which people pointing out that fundamentalist Muslims are opposed to homosexuality and describing the action as ‘vile’.

Self-described ‘Burka Queens’ come out in support of LGBTQ Rights while at the same time preaching the death penalty for Gays as ordained by Islamic Sharia Law when the cameras are shut and the mikes turned off. Via @miss9afi pic.twitter.com/GfATu0UNPy

The national party declined to comment on Biemond’s action and said it was a local party issue.