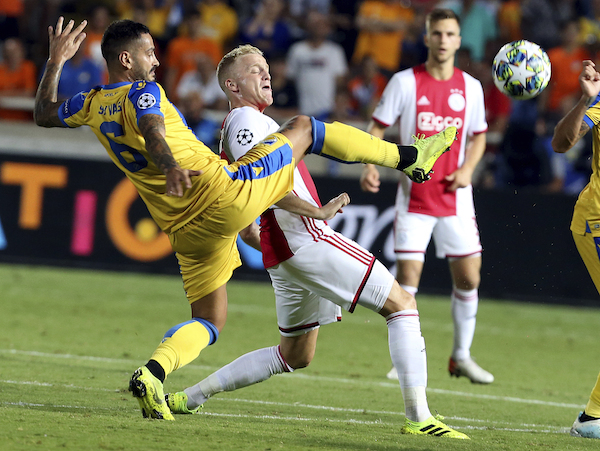 Amsterdam football club Ajax managed no more than a 0-0 away draw against APOEL of Cyprus in the first leg of their Champions League qualifier tie.

Ajax were down to 10 men with 10 minutes left on the clock after Noussair Mazraoui was sent off for a second yellow card. Five other Dutch players, including captain Dusan Tadic, were given a yellow card during the bad-tempered match.

The return leg takes place at the Johan Cruijff Arena in Amsterdam next Tuesday.

‘We didn’t play our best game. We gave the ball away too easily and we must improve next week,’ Tadic told the Uefa website. ‘I expect the same compact defensive zone from APOEL in the second game. But we need to play much better in the second leg.’

Uefa’s Ajax reporter James Thorogood said Ajax could be pleased with the no score draw. ‘Ajax should have been on the scoresheet after getting the better of an intense opening quarter of an hour, but their game unravelled in the sweltering conditions,’ he said.