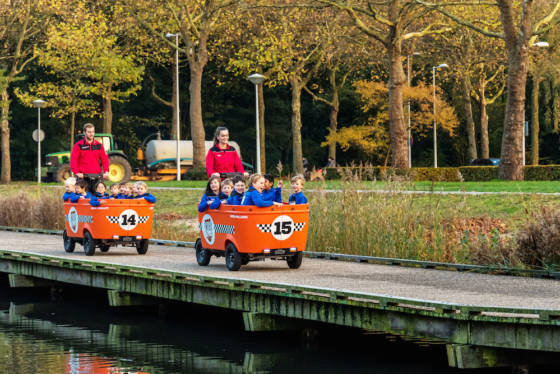 Dutch public prosecutors have said that the woman who was driving an electric Stint vehicle when it crashed into a train at Oss, killing four young children, apparently did everything she could to stop the vehicle.

Menno Buntsma, a laywer who is representing the 33-year-old woman from Heesch, told Oproep Brabant that she was ‘relieved and emotional’ at the announcement.

The OM prosecution service said in a news release that nine months after the fatal accident, it has not been able to find a specific cause. It said that witnesses confirmed that the driver ‘had done everything possible to stop the Stint in order to stop a collision.’

A technical investigation has found no clues about what went wrong and the NFI Dutch forensic institute is currently investigating the vehicle’s motor controller.

Two children of four, one of six and another of eight died in the accident in September last year. An 11-year-old and the driver were seriously wounded.

Transport minister Cora van Nieuwenhuizen immediately banned the electric wagons – used by hundreds of daycare centres to ferry children around. New tough safety regulations agreed by MPs this year mean Stints will need technical upgrades and will then be allowed back on the roads in autumn, carrying eight children rather than 10.

The OM says, however, that until the investigation is fully complete, it has made no decision about whether or not to pursue a prosecution.