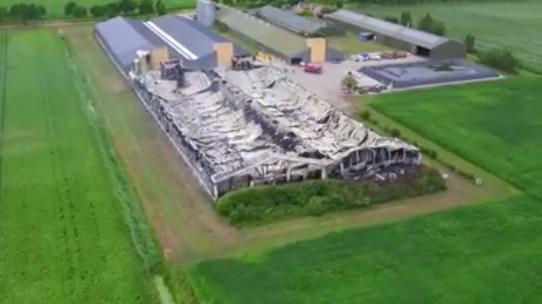 A still from police video footage of the damage

Last week’s fire at a poultry farm in Groningen  in which 100,000 broiler chickens died was probably started deliberately, police said on Facebook.

A suspect was spotted on surveillance camera footage around the time the fire started, police said. They have called on the man to give himself up, or they will release the footage into the public domain.

The fire led to the destruction of two barns at the farm in Kiel-Windeweer, but firemen were able to prevent it spreading further.

There have been at least six farm fires in the village of 900 people in the past 13 years and at least one of those was caused by arson, RTV Noord said earlier.

Last year 122,000 animals died in fires at factory farms in the Netherlands but the government said it would not force farmers to take further measures to prevent fires breaking out because of the cost of the investment.

The current measures do not include compulsory lightning conductors and sprinkler systems.