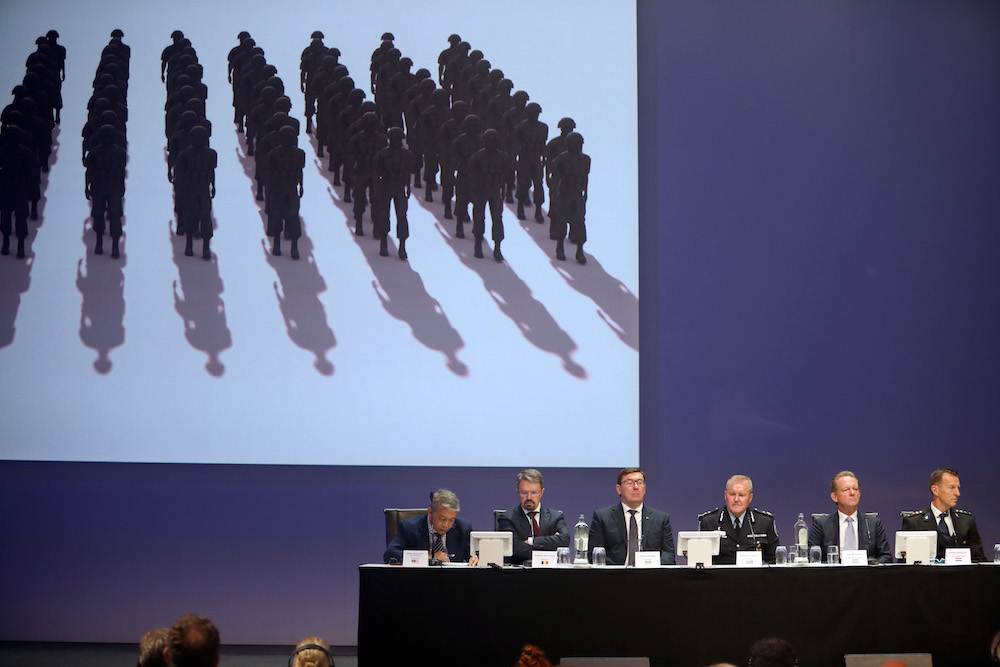 The investigation team at the start of the press conference. Photo: Stijn Rademaker/HH

Four suspects are being prosecuted for downing flight MH17 in 2014, killing 298 passengers and crew – even though prosecutors admit that there is little chance that they will turn up in a Dutch court.

A press conference by the Joint Investigation Team (JIT) of legal teams from Australia, Belgium, Malaysia, Ukraine and the Netherlands announced on Wednesday that it has identified four key suspects who ‘cooperated to obtain and deploy the Buk [missile] at the firing location with the aim of shooting down an aircraft.’

Three of the suspects are Russian and one is Ukrainian, and the JIT has served summons to Russia and Ukraine for them to appear in court in The Hague on 9th March 2020. The suspects are Russians Igor Girkin, Sergey Dubinskiy, Oleg Pulatov and Ukranian Leonid Kharchenko, and all played key roles in the self-proclaimed ‘Donetsk People’s Republic’ in eastern Ukraine.

Fred Westerbeke, from the OM Dutch prosecution service, said that the investigation continues for active soldiers and the people who actually pushed the button on a Buk rocket launcher on 17th July 2014, shooting down the plane and killing all on board.

‘Under Dutch law, people who were not present during a crime but played an important organising role are just as guilty as those who actually carry out the deed,’ he said in a press conference.

‘Girkin, Dubinskiy, Pulatov and Kharchenko were active in the armed conflict. Their joint goal was to win terrain at the cost of the Ukrainian state. The OM believes their plan led to the shooting down of flight MH17: although they may not have pushed the button, they worked together to get the weapon to the air and can be considered suspects.’

In answer to questions he admitted, however, that although the JIT has appealed for them to present themselves for interview and to attend the court case, he wasn’t hopeful that they would turn up. ‘I’m a realist,’ he said.

‘That means that I don’t think there’s a large chance. Five years ago a lot of people said you can start an investigation but you won’t get much out of it. Few people believed we would follow four people and now we are making that step. But this is an important step to show friends and relatives what happened and how it happened.’

The conference revealed details of telephone conversations, photographs and Facebook posts that it said led to the decision to prosecute the four – stressing that they can only be found guilty in a court of law. The team has interviewed 300 people and appealed for more witnesses, who could if necessary enter a witness protection programme.

Westerbeke also appealed for the Russian Federation – held responsible for providing the missile – to share what it knows. ‘We now have information and proof that the Russian Federation is involved in this crime, one way or the other,’ he said. ‘They could have been in the position to tell us exactly what happened because they know: a BUK from the 53rd anti-aircraft brigade was used. I wouldn’t call this cooperation.’

Girkin has already denied that he had anything to do with the disaster, reports the NOS, while the leader of pro-Russian separatists in eastern Ukraine at the time Aleksandr Borodai reportedly called tapped phone conversations ‘fake’.

Meanwhile, the Bellingcat investigative collective published its own report on Wednesday identifying 12 people it says were involved in the disaster, including several new potential suspects.

Justice minister Ferd Grapperhaus has told MPs that diplomatic steps have been taken against Russia for its failure to comply sufficiently with the investigation but did not give further details.