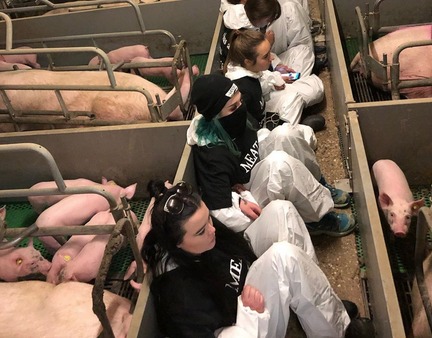 Dozens of animal rights activists have been arrested for occupying a pig farm in Brabant province and refusing to leave, police confirmed on Tuesday.

Police moved in to clear the campaigners around 10pm after consultations between the council, public prosecution department and police. A number of farmers had also converged on the site, and police were keen to stop the situation escalating, the Volkskrant reported. Several farmers had reportedly flipped over activists’ cars.

‘The mayor of Boxtel considers it irresponsible that people force their way into people’s property and occupy their company,’ the town council said on Twitter.

Around 100 international campaigners from the Meat the Victims collective had moved onto the property on Monday morning. Some sat inside the pig barn while others chanted slogans such as ‘there is no excuse for animal abuse’ outside.

The group say they picked the farm at random, describing it as a symbol for everything that is wrong with the livestock industry.

‘Animals have rights,’ one activist, an American woman who lives in the Netherlands, told the Volkskrant. ‘We would never treat dogs or cats like this, but we think it is okay for pigs to never see daylight.’

But farmer Frank van der Burg, who came to support the occupied farm family, told the paper the campaigners are irresponsible. ‘We’ve had swine flu and now 100 people walk into the barn without protective clothing,’ he said. ‘They are risking the health of the entire sector.’

Meat the Victims has staged earlier protests in Australia, Canada, Spain and the UK.