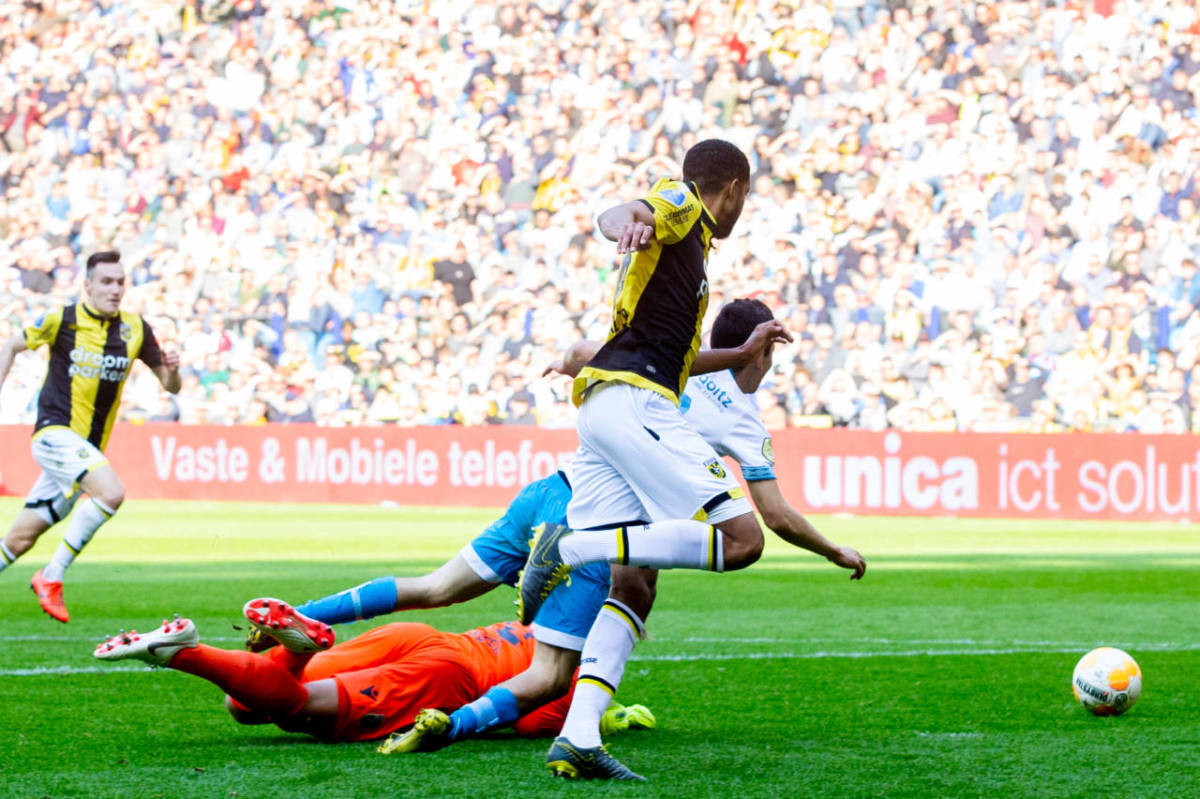 Former PSV goalkeeper Remko Pasveer (on ground) was a thorn in the side of his old club. Photo: Tom Bode/VI via HH

PSV missed the chance to regain the advantage in the Eredivisie as they went behind three times before salvaging a late draw at Vitesse Arnhem.

Hirving Lozano scored two penalties, the second in injury time, to balance out goals by Thulani Serero in the first half and Tim Matavz five minutes from the end. In between Luuk de Jong equalised in the 70th after Martin Ødegaard had put the hosts 2-1 up on 59 minutes.

The result means PSV stay behind Ajax on goal difference with five matches left, following the Amsterdammers’ 4-1 win at Willem II on Saturday. Ajax also notched up their 100th goal of the season with Hakim Ziyech’s clincher on 70 minutes.

It was an especially satisfying outcome for Vitesse goalkeeper Remko Pasveer, who spent three seasons as a reserve netminder for PSV and made several vital saves against his former club, who have won just two of their seven away matches in 2019.

‘It’s rotten luck that he played such a top-class game against us,’ said De Jong. ‘We saw some great stuff from him.’

At the bottom of the table Emmen boosted their chances of surviving their first Eredivisie season by beating Heerenveen 2-0 to climb out of the bottom three. Caner Cavlan scored both goals against his old club to record Emmen’s first victory in eight games.

Excelsior dropped into the relegation lay-off zone with a 1-0 defeat at Groningen, who recorded their seventh straight home win thanks to Paul Gladon’s neat finish in the 70th minute.

De Graafschap joined them on 26 points after scoring a bizarre last-minute equaliser at AZ Alkmaar. Daryl van Mieghem’s floating shot rebounded off the post and went in off the outstretched glove of goalkeeper Marco Bizot. Guus Til had put the home side ahead on 52 minutes.

Feyenoord took advantage of AZ’s misfortune to regain third place with a 3-0 win at VVV Venlo, ending a four-month wait for an away win for Giovanni van Bronckhorst’s side.

Utrecht remain fifth despite a 5-0 thrashing at the hands of ADO Den Haag, bringing an abrupt end to an eight-match unbeaten run for Dick Advocaat’s side. The manager said after the game that he had substituted defender Timo Letschert after a confrontation in the dressing room: ‘What he said isn’t important, but it was too much for him to be allowed to stay on the pitch.’

PEC Zwolle beat Fortuna Sittard by the same scoreline to all but guarantee safety, while the Limburgers are now just four points above the play-off line. NAC Breda are five points adrift at the bottom after losing 1-0 to Heracles, who are just a point behind Utrecht in sixth.