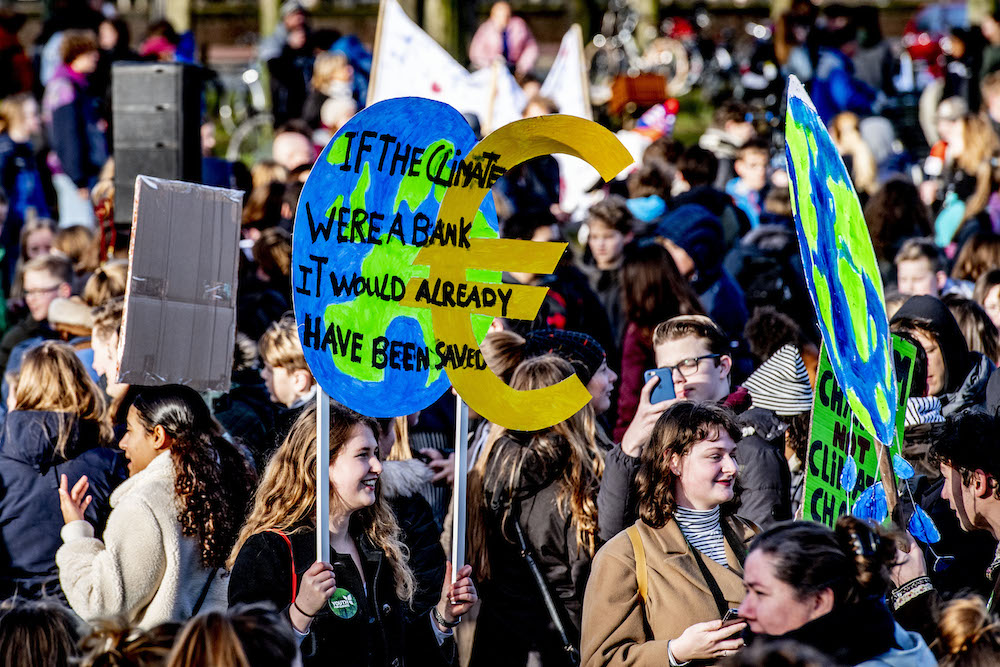 Thousands of secondary school pupils gathered in central The Hague on Thursday to take part in a demonstration calling for action on climate change.

Police put the total at ‘at least 10,000’, broadcaster NOS said, although the pupils estimated the turnout to be far higher. The demonstration, which ended around 1pm, passed off peacefully and there were no incidents, police said.

‘We want to see you again next week. We are going to make a party of it,’ one of the speakers after the march said.

There were, however, problems on the trains both to and from The Hague, which were packed out with teenagers heading for the demo. At one point police warned that The Hague’s main railway stations was full, NOS reported.

In Groningen too, several hundred school pupils took part in their own demonstration. ‘The Hague is a long way away and not great for people who don’t have much money or the time,’ local organizer Idsert Oldenkamp told broadcaster RTV Noord.

Prime minister Mark Rutte described the march as ‘fantastic’. ‘The fact that so many young people are involved is an important signal.’

However, he brushed off criticism that the Netherlands is not doing enough. ‘There is no cabinet in Europe which is as ambitious as this government,’ he is quoted as saying by website Nu.nl.

On Thursday morning, Trouw published a letter from some 350 scientists supporting the school pupil demonstration.

‘On the basis of the facts supplied by climate science, the campaigners are right,’ the letter said. ‘That is why we, as scientists, support them.’

The protest has been inspired by mass demonstrations by school children in neighbouring Belgium, which have attracted tens of thousands of teenagers five Thursdays in a row.