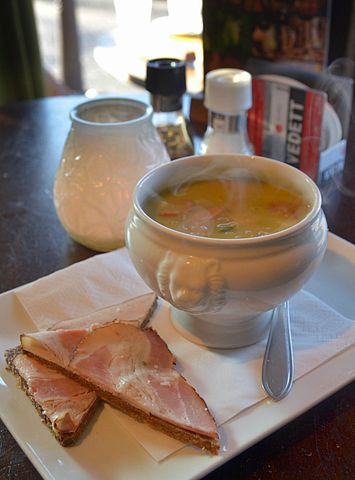 In a blow to those who believe the English invented the thick pea soup, preparing a split pea broth has been recognised as a part of the Netherlands’ immaterial cultural heritage.

Cooking erwtensoep, affectionately known as ‘snert’, will be recognised as a treasured national pastime during the world championships in Groningen on Friday. The director of the Dutch intangible heritage recognition body Leo Adriaanse told the NOS broadcaster that the thick stew had ancient roots but was still alive and bubbling in modern Holland.

‘Many recipes have been passed down through families and new versions are always being added,’ he reportedly said. ‘This wide variation in recipes alone illustrates the dynamic of this living piece of heritage.’

At the world championships in Groningen the root vegetable and pulse soup was due to be served with a traditional silver spoon, the snertslaif. It is the 25th edition of the festival, which also celebrates another icon of Dutch haute cuisine, the potato hash-based stamppot. Both are generally eaten with meat such as smoked sausage, ham or bacon.

To be accepted onto the list, practitioners of an activity need to write a forward-looking ‘care plan’ and take a course. The most prestigious pastimes are proposed to a Unesco list of international intangible cultural heritage.