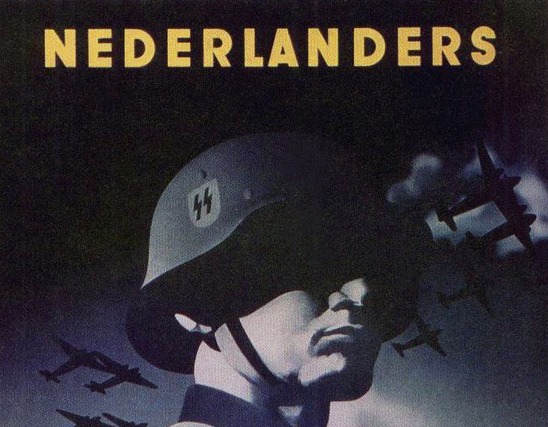 Part of a poster urging the Dutch to join the SS. Photo via Wikimedia Commons

At least 34 Dutch nationals, some of whom were members of the SS during World War II, are still getting benefits from the German authorities, according to research by current affairs show EenVandaag.

The amounts vary from a few hundred to €1,300 a month and the beneficiaries do not pay tax over the money in the Netherlands, EenVandaag said.

The German agency responsible for making the payments would not give any further details, only saying that the beneficiaries were injured during WWII.

But EenVandaag’s research shows that some of them were injured while serving with the Waffen SS. In 14 cases, the benefits are payed to widows and in 10 cases the recipients are dual Dutch and German nationals.

Historian Cees Kleijn, who has been following former SS members and has spoken to around 150, told broadcaster NOS it could not be ruled out that some of the beneficiaries are war criminals.

Although Germany says it does not make payments to war criminals, this cannot be checked because the agency will not name names, Kleijn said.

Dutch Jewish organisation CIDI said it is scandalous that former SS members are receiving cash from Germany. ‘They worked with the Nazis during WWII and are still benefiting,’ spokeswoman Naomi Mestrum said.

According to the Dutch institute for war documentation NIOD, some 25,000 Dutchmen volunteered to join the ranks of the German Waffen SS. This number was not only relatively but also absolutely, the largest contingent of non-German volunteers from all of the Nazi occupied territories.