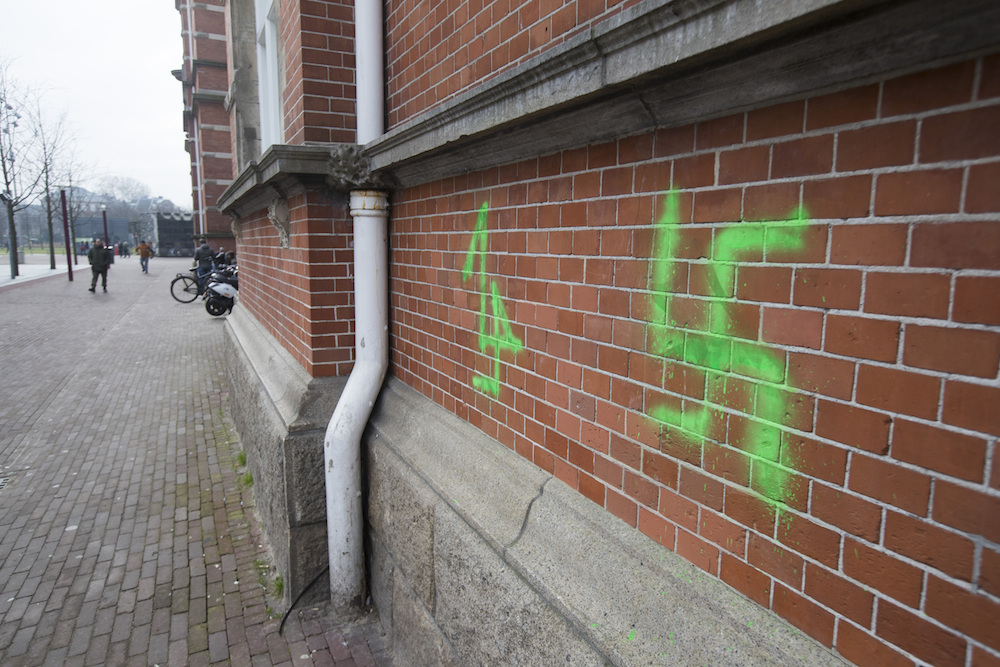 A swastika, painted on the wall of the Stedelijk Museum. Photo: AP Photo/Peter Dejong via HH

Supporters of The Hague football club ADO Den Haag are said to be behind a trail of anti-semitic graffiti in green and yellow paint which appeared overnight around Amsterdam.

The graffiti is being linked to Sunday’s Eredivise match between Amsterdam football club Ajax and ADO. Ajax supporters like to refer to themselves as the Jews, or the super Jews, a nickname which has often led to anti-semitic chanting by opposing fans.

The Dokwerker monument to those who died during a strike against the WWII deportations has been splashed with green and yellow paint – ADO’s official colours. Elsewhere in the city walls have been sprayed swasticas and with the letters JHK, or Jews have cancer. The graffiti also states that 020 is not welcome in 070 – a reference to the two cities’ postcodes.

ADO and Ajax are due to meet in the Eredivise competition on Sunday but the Amsterdam club’s supporters are banned from away games in The Hague. They intend to hold a protest demonstration in The Hague instead.

ADO Den Haag issued a statement on Friday describing the action as ‘disrespectful and sad’.

Amsterdam police have launched an investigation into the vandalism and are using security cameras in an effort to track down the perpetrators.

Ajax supporters are traditionally known as Joden, although opinion is divided about the origins. However, the use of the word has led to a number of racist incidents and chanting at football matches and the club has been keen to discourage it.

Amsterdam mayor Femke Halsema said the Dokwerker is a beloved symbol of the city. ‘Keep your hands off it,’ she said in a statement.