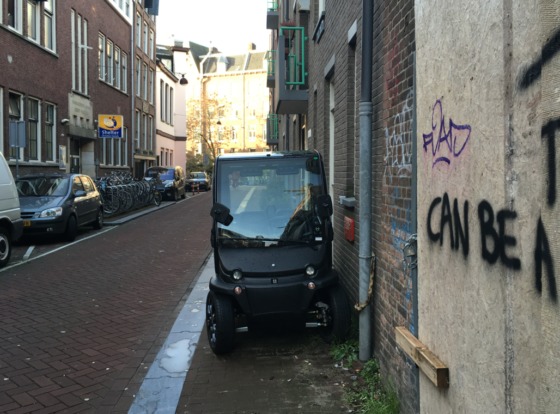 A magistrate’s court in Amsterdam has ruled that the Biro, a small electric car, will no longer be classed as a vehicle for the disabled but as a moped, thereby banning it from the city’s cycle paths, the Parool reports.

The decision was announced in a tweet by the infrastructure ministry, which, the paper says, had long been annoyed at the disabled label which effectively gave Biro drivers the right to drive and park anywhere they liked.

The vehicle is not dissimilar to the Canta, which is meant for people with mobility problems. It is mainly popular with the well-heeled in the south of the city but its use has given rise to complaints about them blocking access to pavements.

Pascal van den Noort of cycle advise bureau VeloMondial welcomed the news. ‘The decision means the Biro is really a car and as such it can no longer park on the pavement or drive on cycle paths. It is allowed on the roads and will have to pay for parking,’ he told the paper.

Traffic alderman Sharon Dijksma said she hoped the decision would lead to better policing but that much remained unclear. ‘This is a magistrate’s court decision and it is not in writing so we don’t know what it is based on. We will talk to the public prosecutions department and the junior infrastructure minister,’ the paper quotes her as saying.

The Biro ban is the latest move in an effort to establish a clear pecking order on the country’s cycle paths. In December last year Amsterdam announced that slower mopeds, known as a snorfiets in Dutch, will be banned from some of the city’s cycle lanes from next April and Utrecht is bringing in a similar ban at the end of the next year.