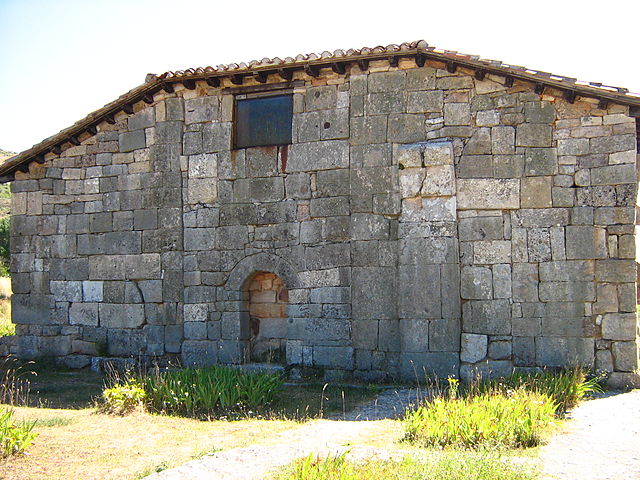 The carvings were stolen from this church. Photo: Jethrothompson via Wikimedia Commons

Dutch art detective Arthur Brand has tracked down two priceless Spanish reliefs stolen from a Visigoth church near Burgos in northern Spain to a garden in the United Kingdom, news agency AFP said on Tuesday.

Brand, who is known as the ‘Indiana Jones’ of the art world, first heard of the stones nine years ago after a tip-off from a man in Britain.

‘He told me there were two big reliefs being offered up for sale as garden ornaments,’ Brand told AFP. ‘But he said there was something about them and said I had better come over and investigate.’

Unfortunately his source had died by the time Brand arrived. All his wife could tell him was that a man called ‘Tony’ was involved.  Brand managed to track Tony down, but the man was suffering from dementia and it was another year before he gave him some photos of the stones.

The stone carvings, one of which depicts John the evangelist, turned out to be part of a Visigoth church called Santa Maria de Lara and were stolen in 2004. The 7th century church, which had only come to light itself in 1921 when a priest discovered the overgrown place of worship during a walk in the countryside, was turned into a national monument in 1929.

‘Visigoth artefacts are a rarity and the thieves no doubt thought they could make a bomb,’ Brand said. ‘But although worth millions, they could not shift them because they are national heritage. They eventually sold them as garden ornaments.’

Put on the track by Tony, Brand found the French dealer who had handled the stones. He claimed to have no idea of the real value of the carvings but could give him the address of his aristocratic British buyers.

The man who had bought them had died but his wife said the stones were in their garden. ‘A garden as big as the Veluwe! And there they were. The wife was very shocked when she heard the whole story. She told us to take the stones and leave the whereabouts of the stones out of it,’ broadcaster NOS quotes Brand as saying.

Brand has handed over the stones to the Spanish embassy in London who will return them to the church, NOS reports.