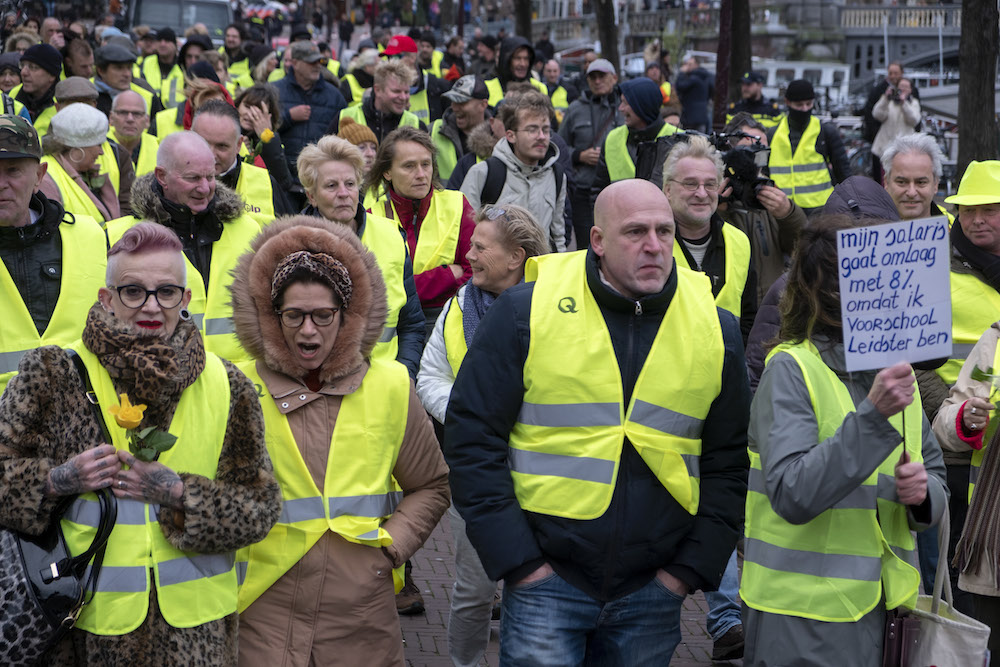 Some 600 people took part in ‘yellow jacket’ demonstrations in several Dutch cities this weekend, as politicians, including the prime minister said they had some sympathy for the cause.

In Amsterdam, local broadcaster At5 said around 70 demonstrators showed up at city hall for a protest, which involved walking round the building singing the song ‘15 miljoen mensen‘. Other estimates put the crowd in Amsterdam at 200.

In Maastricht, between 150 and 200 people held a march and handed out leaflets saying ‘let us battle together for the future of our grandchildren’. A similar number gathered at the Erasmus bridge in central Rotterdam. There were also demonstrations by ‘several dozen’ people in The Hague, Arnhem and Eindhoven, Dutch media reported.

On Friday, prime minister Mark Rutte said in his weekly broadcast on public television that ‘everyone is wearing a yellow jacket, up to a certain point’, while at the same time condemning the violence in France.

Rutte said he could understand that people in the Netherlands had concerns about migration and refugees, about the consequences of climate change and about income.

Politicians have to answer all these questions, the prime minister said. ‘If I was not a politician I would be writing angry letters to the papers,’ he said. ‘I can do a bit more [as prime minister] but there is limited money, and so limits to what can be done.’

Christian Democrat party leader Sybrand Buma told current affair show Buitenhof that politicians in the Netherlands should be taking action on behalf of people who find themselves short of money at the end of the month.

Socialist party leader Lilian Marijnissen said that the Dutch yellow jackets are people who ‘are demanding their fair share’.

‘This cabinet has promised that everyone will have more to spend,’ she said. ‘But an awful lot of people don’t notice it, while their health insurance, energy bills and rents are going up.’