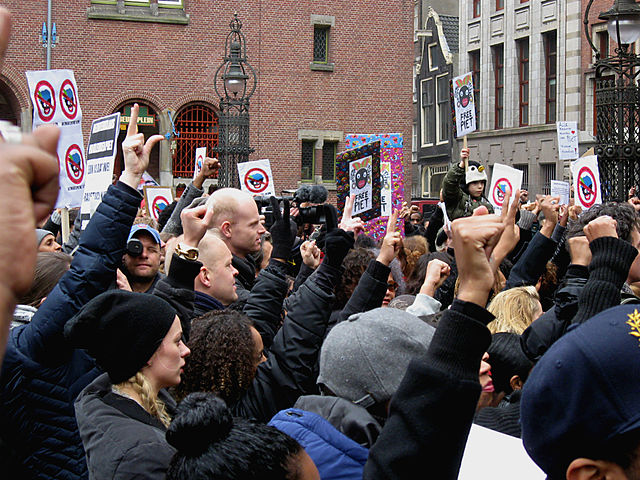 Anti-Zwarte Piet campaigners have lost their attempt to have ‘all racist characteristics’ removed from the character’s appearance at Saturday’s Sinterklaas parade in Zaandijk, north of Amsterdam.

A group calling itself the Majority Perspective foundation went to court on Tuesday to ask judges to make sure that Piet has no racist characteristics, such as earrings and big red lips, or showed slavish or stupid behaviour.

However, the judge said the foundation, which claims to represent a number of adults and children of African descent, had not had proper talks with Zaandam council, which is organising the procession.

The council has been ‘taken by surprise’ by the foundation’s demands and has had no time to react, the judge said. He also rejected calls to ban the procession being shown live on television.

In his summing up, the judge referred to international criticism of Zwarte Piet, in particular a report by the UN Committee on the Elimination of Racial Discrimination in 2015. The UN body then urged the Dutch government to actively work to change the features of Sinterklaas’ helper Zwarte Piet which reflect negative stereotypes.

The case targeted Zaanstad’s mayor Jan Hamming, the public broadcaster which will show the procession live and the event bureau organising it as well as the Dutch media commission and the Dutch state.

The campaign to get rid of Piet’s curly hair, red lips and blackface makeup has gathered momentum in recent years and in Amsterdam, for example, Piets with sooty faces will dominate at the city’s own parade on Sunday.

The government has always refused to take a stand, although prime minister Mark Rutte was heavily criticised in 2014 when he said that his friends in the Antilleans (the Dutch former colonies in the Caribbean) ‘are very happy when it is Sinterklaas because they don’t have to paint their faces’.

A poll by television show EenVandaag last year showed that 68% of the population back keeping Zwarte Piet black, while 26% are open to change. In 2013, the traditional version of Sinterklaas’ helper had 89% support.

However, a majority of people under the age of 25 support getting rid of the blackface make-up, the poll last year showed.

The ‘arrival’ of Sinterklaas on Saturday kicks off three weeks of festivities leading up to December 5.

This year the Kick Out Zwarte Piet campaign has said it will not demonstrate in Zaandijk during the opening event. Instead, the organisation has applied for licences to hold demonstrations at 18 other locations including Dokkum, which it was unable to reach last year because of the motorway blockade.

Last week 34 campaigners who blocked the A7 motorway with cars to stop anti-Zwarte Piet demonstrators reaching Dokkum were sentenced to community service of between 80 and 240 hours and suspended jail terms of one month.