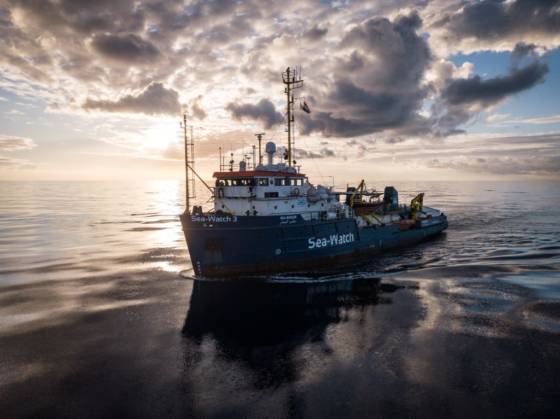 A Dutch government-appointed inspector will travel to a refugee rescue ship in Malta to check whether it is sticking to its search and rescue limits.

The Sea Watch 3 ship belongs to a German aid operation, picking up migrants who get into difficulties when crossing the Mediterranean to reach Europe. It is sailing under the Dutch flag, and so The Netherlands is responsible for its actions.

But the ship has been grounded since Monday by authorities in Malta, who suspect that it is not sticking to its mandate to save drowning people but is – reports the NOS – operating as an ‘undercover ferry’.

The Dutch inspection will check whether it is operating in accordance with its certification and equipment before taking further steps.

Junior immigration minister Mark Harbers said in a response to parliamentary questions earlier in the week that the cabinet ‘supports lifesaving activities’ but ‘shares the concerns of the Italian government that NGO ships are not always properly equipped to carry out rescue operations’ and about ‘the side effects of the presence of NGO vessels close to the Libyan coast’.

Malta has also prohibited the Sea Watch operation from using an aircraft to search for migrant boats.

In June, Mark Rutte called for EU leaders to end a war of words on migration after Italy had refused permission for a ship carrying 629 migrants to land and Spain granted them asylum instead. European leaders made a new deal to handle African migrants last week.

A spokesman for Sea Watch said that the Dutch-registered ship had a major, five-year independent inspection two weeks ago and noted that its plane was grounded this week.

‘This has nothing to do with technical or regulatory issues,’ he told DutchNews.nl. ‘It is about a political campaign against civil sea rescue.

‘It is the policy of the EU to let people drown at their borders and pay the cost to bring people [back] to Africa, and they don’t want to have witnesses.’