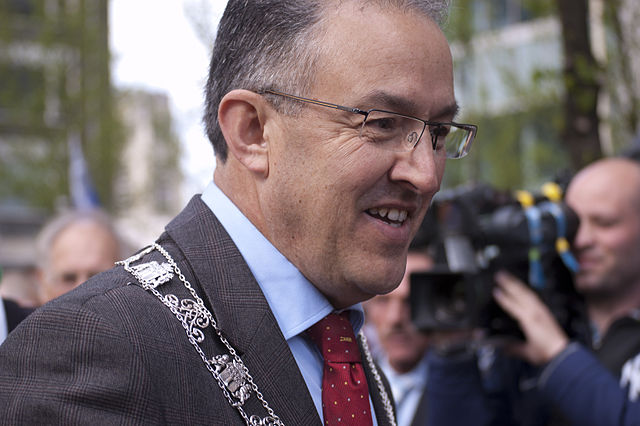 Rotterdam mayor Ahmed Aboutaleb has commented on the decision by anti-Islam campaign group Pegida to call off a protest outside a mosque in the port city, saying every message has the right to be heard.

‘Every message, no matter how poisonous the message is, should have the right to be expressed,’ Aboutaleb is reported as saying in a speech at an Iftar meal on Sunday. Iftar is the meal which Muslims eat to break their ramadan fast.

Pegida had planned to hold ‘pork barbecues’ outside several mosques across the country but the demonstrations were banned in Utrecht, The Hague, Arnhem and Gouda.

Aboutaleb had given the green light to the protest but a bus carrying about 20 Pegida supporters turned back after hearing that several hundred people had gathered for a counter-demonstration.

The Rotterdam mayor also spoke about how he had been put under religious and moral pressure to ban the demo. ‘It went so far that the Turkish minister of foreign affairs tried to teach me a lesson about my Islamic identity,’ he said.

‘It is going too far if a foreign state, which is a long way away, tries to teach the mayor of Rotterdam about Dutch law and how I should apply it.’

The fact that the Pegida message was not heard, is a sign of intolerance, not winning, he said.

Earlier, locals had surrounded the mosque where the protest was due to take place with a wall of flowers.

❤ Dutch (non-Muslims) show love to Mosque: A wall of flowers was set up in front of the entrance of Laleli mosque in #Rotterdam & surrounded by words of peace as a response to the BBQ event that far-right group Pegida wanted to hold in front of mosque. pic.twitter.com/PWjJe78gLm