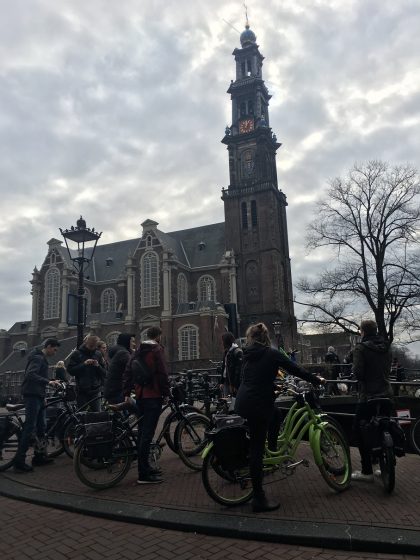 There are 10 tourists for every Amsterdam resident, according to a new analysis from ABN AMRO.

Its report – which asks if ‘social unrest puts a brake on tourism’ – says that although most overnight trips in the Netherlands are from Dutch travellers, the growth in tourism is coming from abroad.

New figures from the national statistics office CBS earlier this week showed that tourist numbers to the Netherlands topped 42 million in 2017, with the biggest year-on-year growth in a decade and a rise of almost 9%.

But it did not include the number of so-called ‘Airbnb travellers’, booking through short-term rental broker websites.

The ABN AMRO ‘Insights’ analysis estimates the whole sector. In August 2017, it reports that there were ‘more tourists in hotels and Airbnbs in Amsterdam than residents in the city’.

There were 737,000 tourists in hotels and 150,000 in short-term private rentals, it claims. ‘For every resident there are – averaging out over the year – at least 10 hotel guests in the city,’ it adds.

The report notes that protests about ‘Disneyfication’ of the capital have resulted in a stop in central hotel building, ban on the ‘beer bike’ in the busiest parts and reduction in the number of permitted days for private, unlicenced short-term lets, from 60 days this year to 30 in 2019.

Although it says that tourism should be good for the economy and jobs, it notes social unrest in other cities – even though they have far fewer tourists per resident. In Maastricht, there are concerns about nuisance from tour coaches and Utrecht wants new rules about Airbnb.

Amsterdam and the Dutch national government have been encouraging tourists to see more of the country, rather than focusing on the capital, describing nearby attractions as ‘greater Amsterdam’

GroenLinks, the green left party which won the largest number of seats in the capital’s recent municipal elections, campaigned heavily on ‘balancing’ the economic benefits of tourism and minimising problems such as a lack of housing for residents.

A spokesman for Airbnb said that it has automated limits on stays in Amsterdam unless hosts confirm they have a ‘proper licence’. He told DutchNews.nl that it has passed ‘an estimated €17 million of tax revenues’ to the city from 2015 to 2017, adding that it ‘would indeed be interesting to explain what happens with that money.’