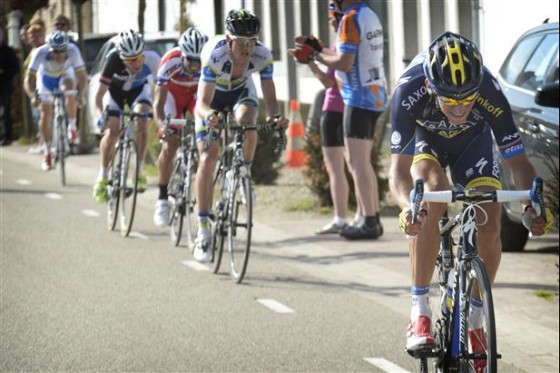 Bike lanes are becoming dangerous race tracks thanks to the growth in racing  and high-speed electric bikes, according to the VVN traffic safety organisation.

The organisation said on Friday that around 65,000 Dutch cyclists have accidents requiring hospital treatment every year.

It attributes the number partly to a jostle for space on the bike lanes, with a growth in racing bikes from 2,000 eight years ago to around 5,000 now.

‘We are calling for a greater sense of sharing on the bike lanes,’ VVN spokesman Rob Stomphorst told DutchNews.nl. ‘Racers need to get on better with pleasure cyclists. Often they don’t let you know they are coming, and don’t have a bell because they aren’t aerodynamic – but they could put a bell on their bikes instead of screaming at people.

‘Bike paths are for everyone and nobody has to pull over to one side.’

He told Dutch media that half of cyclists sometimes take a different route because bike paths are overcrowded and dangerous and 10% have even ditched their bikes to return to car, bus or tram travel.

According to Dutch statistics office CBS, last year there were 10,000 high-speed electric bicycles in the Netherlands which can go at up to 45 km an hour, and these are now subject to the same rules as mopeds.

There has been debate about whether such bikes should ride on the roads; from 2019 Amsterdam is expected to require moped riders to wear helmets and avoid bike lanes.

Fatal accidents, though, are most likely to happen to car drivers, according to the CBS’s most recent figures, for 2015, followed by cyclists.

Stomphorst admitted that many accidents are caused by collisions with motorised traffic rather than other cyclists, and that accidents tend to involve older cyclists. ‘But that’s another subject,’ he said.