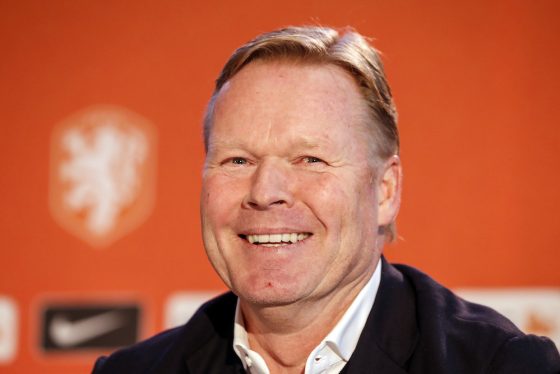 As expected, Ronald Koeman has been appointed new manager of the Dutch national football team.

‘I have never made a secret of my ambition to coach the Dutch national team at some point,’ Koeman said at Tuesday’s press conference. ‘It is a great challenge and a real honour to be Oranje’s coach in the coming years.’

Koeman was sacked three months ago by English club Everton and the Dutch football association KNVB has been searching for a new manager for Oranje since Dick Advocaat left in November. He was ditched after the Dutch failed to qualify for this year’s World Cup in Russia.

Koeman, a former Dutch international with 78 caps, was first tipped as a potential manager after the 2014 World Cup, in which Louis van Gaal led Oranje to second place.

The KNVB’s head of professional football Eric Gudde said in a statement that Koeman and Nico-Jan Hoogma, the new head of top level football, are ‘passionate, with plenty of foreign experience and are real team players.’

I am proud to finally announce that I am the new manager of the Dutch national team. Happy to be here and serve the country in our road to UEFA Euro 2020! 🔸🇳🇱🔸 #OnsOranje #KNVB #NederlandsElftal https://t.co/OQwmIUp0xj