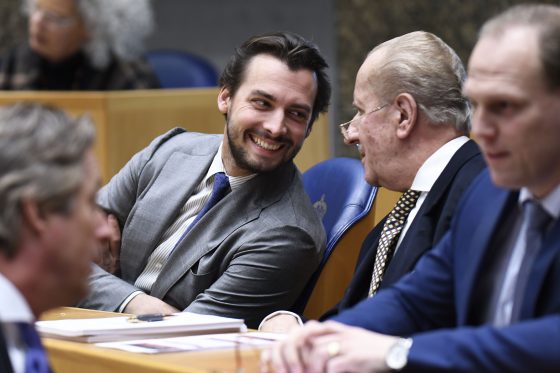 Fledgling political party Forum for Democracy, which is currently riding high in the opinion polls, has become embroiled in two public spats this week: one focusing on the link between race and IQ, the other on the party’s internal organisation.

On Tuesday, MPs rejected calls by GroenLinks leader Jesse Klaver to debate statements made by Forum for Democracy MP Theo Hiddema, which Klaver described as racist.

Hiddema, a lawyer by profession, said in De Telegraaf on Tuesday it has ‘long been proven’ that there is a relationship between ‘IQ and race’. ‘That is science,’ Hiddema added.

Hiddema himself was commenting on the furore over a television interview given by the party’s number two in Amsterdam Yernaz Ramautarsing, several years ago.

In that interview Ramautarsing said that he ‘would rather have seen that black people are hyper intelligent and that Surinamese people have the highest average IQ in the world’.

Describing Hiddema’s comments as ‘repulsive and un-Dutch’, Klaver called for a debate with prime minister Mark Rutte on the ‘forceful condemnation’ of racism and discrimination.

However, MPs, including the four coalition parties, said that Klaver was using an odd parliamentary construction to force a debate. Instead, they referred him to next week’s planned debate on discrimination, where he would be able to tackle Hiddema instead.

One of the authors of the letter, Arthur Legger, described Baudet’s reaction as ‘quite emotional and fierce’. ‘We wrote a decent letter and called for internal democratisation. That is all we are doing. And that in a party calling itself Forum for Democracy. It is actually a joke that I have to say that.’

The FvD, which has two MPs, is only contesting the local elections in Amsterdam, where the party is forecast to win two to three seats.