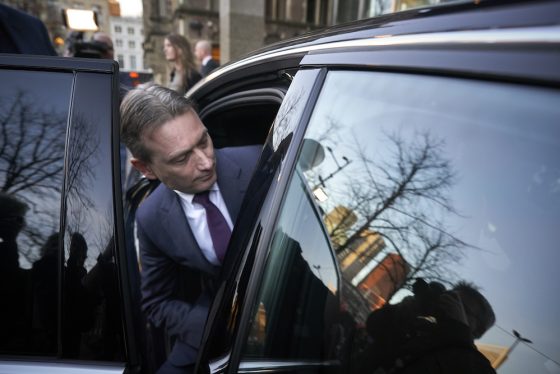 Dutch foreign minister Halbe Zijlstra has resigned after admitting he lied about being in Russian president Vladimir’s dacha in 2006 and hearing Putin talk about his plans for a greater Russia.

Zijlstra had been under fire since admitting on Monday that he lied about overhearing Putin define ‘Greater Russia’ as ‘Russia, Belarus, Ukraine and the Baltic states,’ then adding that ‘Kazakhstan was nice to have’.

He had been due to debate the incident with MPs on Tuesday afternoon but resigned ahead of the scheduled debate.

In a short statement, Zijlstra said the lie was ‘by far the biggest mistake I have made in my political career’. ‘The Netherlands,’ he said, ‘deserves a foreign affairs minister who is above all reproach.’

Doubts about the veracity of the foreign minister’s claims came to light when former senior Shell executive Jeroen van der Veer told the Volkskrant that Zijlstra had not been at the meeting in 2006. Zijlstra then admitted he was not present but insisted that the substance of the story was true.

Van der Veer  later emailed the Volkskrant to say he had spoken to Zijlstra about Putin in a more wide-ranging conversation but that Putin’s remark about Greater Russia was ‘historically intended’.

Zijlstra’s interpretation of the comments ‘did not come from me or from the words I used’, he said. Nor does Van der Veer recognise the quote about Kazakhstan. ‘I don’t recall how I mentioned the specific countries to Zijlstra at the time, but “nice to have” is not a term I would use,’ he told the paper.

Klaas Dijkstra, who leads the VVD in the lower house of parliament, said in a statement he ‘understood and respected’ Zijlstra’s decision.

‘What he did was stupid and unrepresentative of his contribution to our country,’ he said. ‘He has been of immeasurable value to the VVD, is one of the supporters of the policy which helped us out of the crisis and one of the architects of the cabinet he is now leaving.’

The Russian embassy in The Hague on Tuesday issued a statement describing Zijlstra’s action as a domestic matter but accusing the Netherlands of spreading anti-Russian sentiment.

‘We cannot ignore how perceptions of Russia’s aggressive intentions are being persistently propagated in Dutch public opinion,’ the statement said.