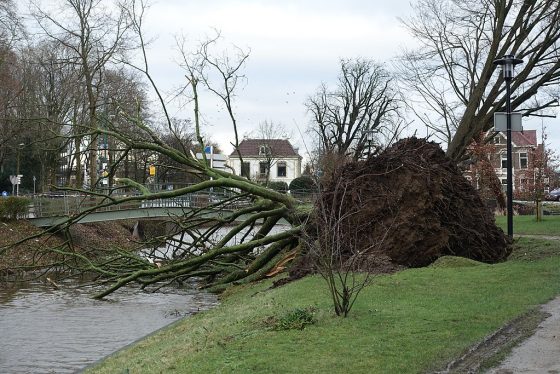 The bill for Thursday’s storm which battered the Netherlands with winds of up to 130 kph mounted still further on Friday afternoon, as corporate insurance claims began to pile in.

Insurance company Interpolis said  that the bill to the farming sector would be at least €20m as farmers began assessing the damage.

Interpolis said 1,200 claims had been submitted so far, around 25% of which related to damage to greenhouses.

Earlier on Friday, the insurers association VvV said the storm had caused at least €90m worth of damage to private homes and cars. In some cases the storm blew off entire roofs and dozens of cars were damage by falling trees, roof tiles and other debris.

Rail network operator said it had had to deal with 344 separate storm-related incidents on Thursday, including 97 trees on the track and 20 damaged overhead cables.

Despite the disruption to services on Thursday evening, the company said it was pleased that most services had resumed on Friday.

‘Our staff have done all they could to remove the trees and repair the broken cables,’ a spokesman said.

Nationwide, thousands of trees were brought down by the storm and the forestry commission has advised people to be careful while walking in the woods this weekend because of the risk of falling branches.