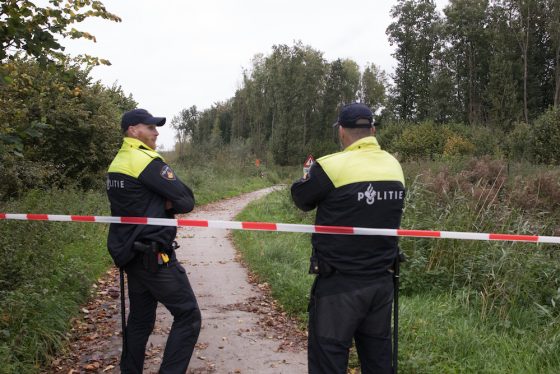 A large part of the nature reserve was sealed off. Photo: Caspar Huurdeman Fotografie / HH

Police have found the body of 25-year-old Anne Faber who vanished on a bike ride near Utrecht almost two weeks ago.

Her body was found in a nature reserve near Zeewolde, a small town on the eastern side of the Flevoland polder. Police had warned her family on Wednesday night that they had specific information which had led them to mount a careful search of the area.

The man arrested in connection with her disappearance, who comes from Zeewolde, had given the police specific information about where her body would be.

As yet it is unclear how she died.

Her uncle told Thursday evening’s news conference: ‘The worst scenario has unfortunately come true.’ He went on to thank police, the army and the volunteers who had helped in the search, which has gripped the Netherlands since Anne vanished.

She was last seen on the evening of September 29 in Baarn, near Utrecht, when she sent a selfie to friends before setting off on a bike ride. She may have tried to take shelter from a storm and her phone was picked up by a transmitter south of Soest at around 7.30pm, but that was the last known trace of her. Her jacket, bike and bag were later found near the Huis ter Heide country estate.

A 27-year-old convicted rapist, who was living in a psychiatric clinic not far from the route Anne was thought to have taken, was arrested earlier this week. He was remanded in custody by judges earlier on Thursday.

Michael P was jailed for 11 years in 2012 for the brutal rape of two teenage girls and for a string of robberies. He was allowed out of the clinic as part of a resocialisation programme, the Telegraaf said.