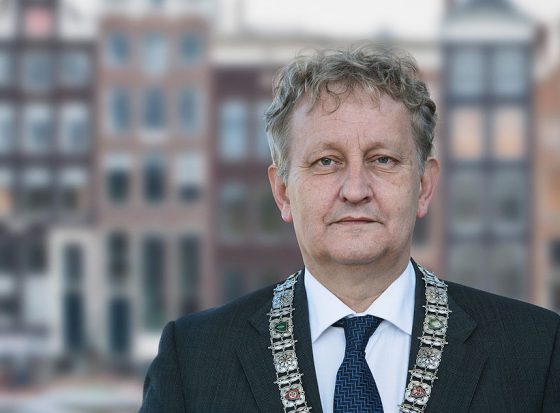 Amsterdam mayor Eberhard van der Laan has died from lung cancer at the age of 62.

Van der Laan, who first took up the post in 2010, stepped down from formal duties last month after doctors said there was no more that could be done for him.

Van der Laan went public about his lung cancer diagnosis in January, saying the cancer had spread and that there is ‘little reason for optimism’. ‘I will continue to do my job… in a way which is right. I wish to remain your mayor for a little longer,’ he said at the time.

In a second letter in September the mayor said the ‘little longer’ was now over. ‘I have ‘been your mayor with great pleasure for the past eight months. Your support has helped me enormously,’ he said.

Hundreds of people packed into the Herengracht outside the mayor’s official residence in an emotional show of support for the mayor after he announced that he was stepping down.

In 2013, Van der Laan, a smoker, was treated for prostate cancer. Last year, Van der Laan was renamed for a second, six-year term as Amsterdam mayor. A lawyer by profession and a Labour party supporter, he leaves his wife Femke and five children.

This summer Van der Laan was a guest on the talk show Zomergasten, in which he said he hoped his legacy would be that Amsterdam remained ‘een lieve stad’ – a kind Amsterdam.

Last year, shortly after the Brexit vote, Van der Laan held a meeting at the city hall for British residents of the city, pledging to do all he could for them.