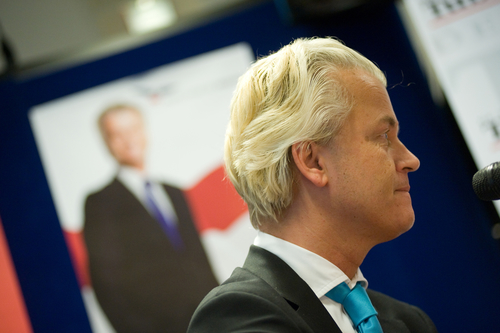 Freedom Party (PVV) leader Geert Wilders has said he will attend court for the first time later this week to defend himself against charges of inciting hatred against Moroccans.

Wilders has so far boycotted the hearings at Schiphol’s high-security courthouse and dismissed the trial as politically motivated. But on Monday afternoon he announced via Twitter that he would address the court ‘later this week… to give my last word in the trial against freedom of expression’.

The proceedings were triggered by a speech Wilders gave in a cafe in The Hague following the local elections in 2014. He asked a room full of supporters if they wanted to see ‘more or fewer’ Moroccans in the Netherlands, prompting a chant of ‘fewer, fewer.’ Wilders replied: ‘OK, we’ll take care of that.’

The prosecution has asked the court to fine Wilders €5,000 for his comments, arguing that the politician had been ‘unnecessarily offensive’ and attacked an entire population group.

Wilders’s lawyer Gert-Jan Knoops, presenting the defence case on Monday, said the remarks were unsurprising. ‘Wilders is a well-known politician whose views will be known to almost everybody,’ he said.

Knoops argued that the comments could not be seen as racist because Wilders was referring to Moroccan nationals, not people of Moroccan origin. He also said Wilders had later clarified his remarks by saying he was referring specifically to people ‘who turn up repeatedly on certain lists’ and commit higher levels of crime.

The court is due to issue its judgment on December 9.