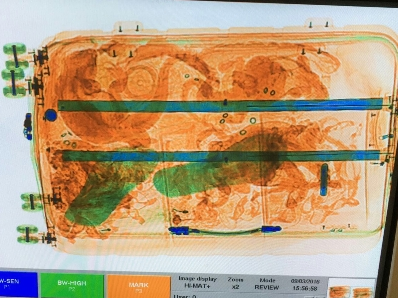 One of the suitcases. Photo: NVWA.nl

Three Spanish nationals have been arrested at Schiphol airport after customs officials found 259 reptiles stuffed into four suitcases they were carrying.

The haul included snakes, lizards and tortoises, 10 of which had died during the journey. If they had been traded on the open market, the reptiles would have had a value of some €80,000, officials said.

The three men were on their way from Mexico to Spain when they were stopped at Schiphol. Many of the reptiles in their bags were protected species, including 14 chucawallas, a lizard found only on the Mexican island of San Esteban.

Last month, a German man was arrested at Schiphol airport after customs officials found dozens of snakes, lizards and other reptiles hidden in his suitcase.

The man was on his way from South Africa to Germany to sell the animals at a reptile fair. Some 40 reptiles were stuffed in a plastic box in the suitcase and several had not survived the journey.

And at the end of August, police and customs officers  seized a record haul of illegal animal products, including swordfish horns, mounted crocodiles and coral from five storage units in North Brabant, together with €500,000 in cash and gold.