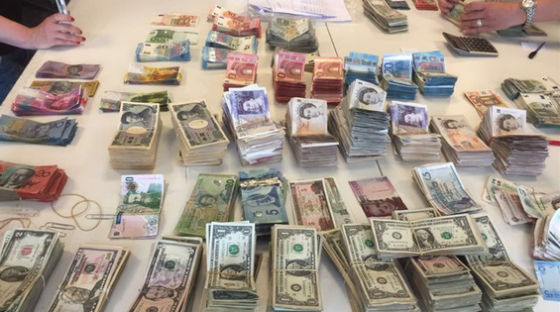 Some of the cash seized by police. Photo: OM.nl

Police and finance ministry officials have raided six companies at 10 locations throughout the Netherlands in connection with an international investigation into a letter scam based on non-existent prizes.

The Dutch firms manage some 300 post office boxes which were used by the fraudsters to con people into sending them money, the public prosecution department said in a statement. The scam netted the gang millions of euros, the department said.

There were no arrests but officials seized thousands of envelopes containing bank notes and cheques, as well as watches, art, expensive cars and €500,000 in cash. In Utrecht they found pallets loaded with hundreds of thousands of printed letters ready to be sent, the public prosecution department said.

The fraudsters sent letters to ‘hundreds of thousands of people’ urging them to make over small amounts of cash as a fee in return for a major prize or as a donation to a charity. The victims were based in the US, Britain, Japan, France and other countries.

The payments, of between €20 and €45, were addressed to the post office boxes  in the Netherlands. These were managed by the Dutch companies, which sorted the post and processed the payments.

At the same time as the raids, the American justice ministry filed a civil case against two of the Dutch companies – Trends Service in Kommunikatie and Kommunikatie Service Buitenland – both of which are direct mail companies based in Utrecht. According to the complaint, they may have helped scam at least $18m a year from victims in the US.

‘Schemes targeting elderly victims are increasingly international in scope, but geographic distance will not prevent us from seeking justice and holding bad actors accountable,’ Benjamin Mizer of the US Justice department’s civil division said in a statement.

The Dutch public prosecution department says the Dutch companies are thought to have facilitated the fraud but that the main suspects are not in the Netherlands.

‘Presumably, the companies were allowed to keep part of the money as payment for services rendered, but the larger part of the money was transferred to bank accounts, which allegedly belonged to the main suspects of the fraud,’ the department said.

The investigation was launched after customs officials at Schiphol airport intercepted a large quantity of letters.