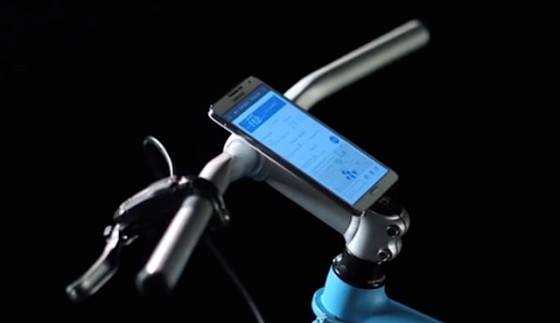 Some bikes have mobile phone holders built onto them. Photo: Samsung

Transport minister Melanie Schultz told MPs on Thursday that she is looking into the possibility of banning people from using mobile phones while cycling.

Last year Schultz said she opposed a ban because it would be impossible to enforce.

However, a spokeswoman for the minister told RTL that campaigns alerting people to the dangers of using smart phones on a bike have not had the desired effect.

One in three 12 to 21 year olds cycle and use their phones at the same time and phones are said to have played a role in 20% of bike accidents involving the under-25s, the spokeswoman said.

The new research has also been prompted by a father whose 13-year-old son was killed while using his phone while cycling last year. Michael Kulkens has been campaigning for a ban since then.

‘The woman who killed my son is absolutely blameless and her life has been turned upside down as well,’ he told RTL on Thursday.

Last year, The Hague bus and tram company HTM said its drivers have to take evasive action at least 40 times a day because cyclists are busy on their phones.