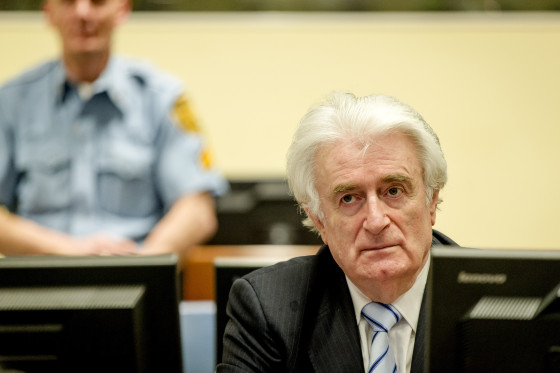 Karadzic in the courtroom for the reading of his verdict. Photo Robin van Lonkhuijsen, via AP

Former Bosnian Serb leader Radovan Karadzic was on Thursday jailed for 40 years for his role in the massacre at Srebrenica and other crimes during the Yugoslavian civil war.

Karadzic was found guilty of 10 of the 11 charges he faced, including genocide, crimes against humanity and hostage taking. He was extradited to The Hague to stand trial in 2008 after 13 years on the run.

The trial at the International criminal tribunal for the former Yugoslavia lasted five years and the tribunal has taken 18 months to reach its verdict.

Chief prosecutor Serge Brammertz told the Guardian the trial of Karadzic embodied the tribunal’s achievement in ending impunity for crimes on a mass scale.

‘This judgment demonstrates that justice for the most horrific atrocities is possible,’ Brammertz told the Guardian. ‘Thirty years ago, men such as Karadzic would have remained in power or enjoyed a comfortable exile. Today, they have to stand before a court of justice and their victims and be judged for what they have done.’

More on this
How could you do this Karadzic?,’ asks Srebrenica mother