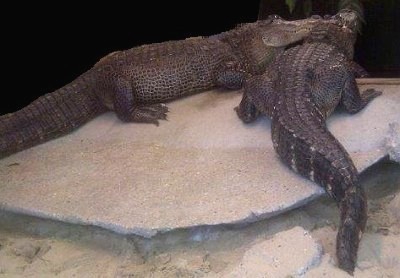 Synthetic drug traffickers in Amsterdam have been using large crocodiles to guard their money, according to a police report on Friday.

The beasts were found when police conducted raids on six houses in Amsterdam and one in Almere. The raids netted several kilos of synthetic drugs, including €500,000 worth of crystal meth, €300,000 in cash, and several  firearms. In total nine men and two women ranging in age from 25 to 55 were taken into custody.

Most of the cash was in a room in one house guarded by the two crocodiles which would-be thieves would have to pass to get to the money.

The owner of the crocodiles was following the law, a police spokesperson told Nu.nl and had the appropriate permits for the animals. The animals are not being moved and someone is periodically visiting to feed them, the Telegraaf says.

While the use of exotic animals to guard drug money may seem like something from a Hollywood thriller, dangerous reptiles have become popular among drug dealers all across the US.

In addition to using dangerous and exotic animals to guard drugs and money, raids in Mexico revealed that drug traffickers there had enormous private zoos full of lions, tigers, monkeys and parrots.